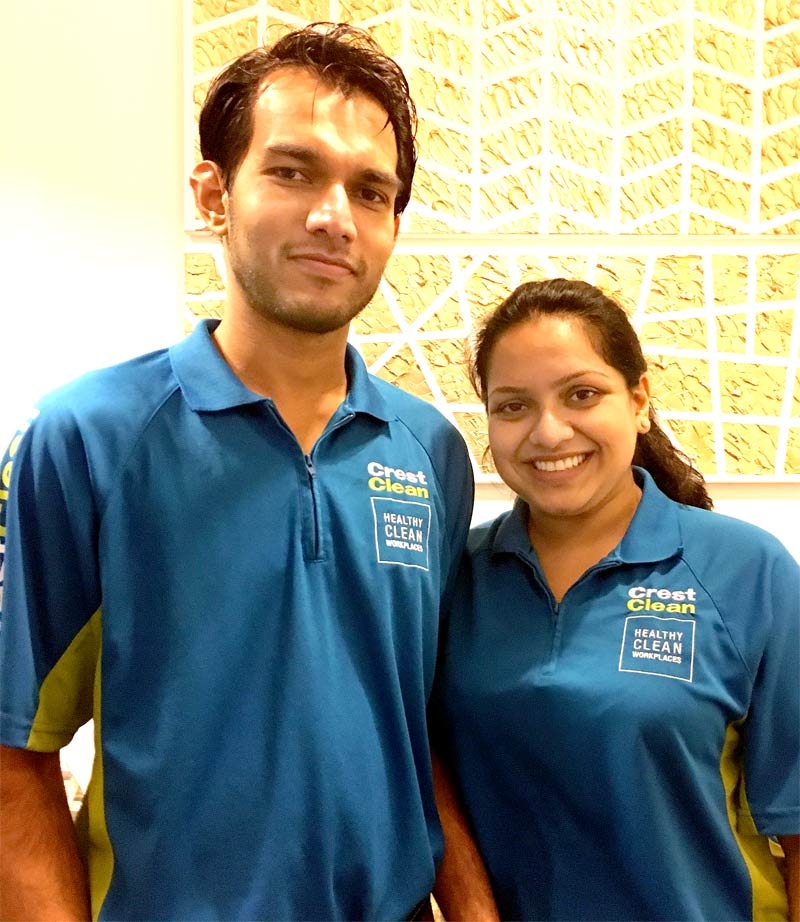 Leo Liyanage and Yahani Ranasinghe raised the alarm after fearing a fire was starting.

Farmlands managers have praised a quick-thinking CrestClean team for their part in preventing what could have been a major fire.

Leo Liyanage and Yahani Ranasinghe raised the alarm when they smelled something suspicious while cleaning the Dunedin office building on Monday evening.

A strong burning smell left them worried that something in a kitchen area was about to go up in flames.

Firefighters who rushed to the building after the alarm was raised found a fridge was overheating and said had it not been detected the faulty motor could have triggered a blaze.

The husband and wife team, who have their own CrestClean franchise, have been thanked for their swift action in contacting Farmlands.

Suzie McBeth, Property and Asset Administrator Farmlands Co-operative Society, had nothing but praise for the couple.

In an email to CrestClean’s Dunedin Regional Manager Tony Kramers she says: “Can you please pass on my thanks to Leo and Yahani Liyanage.

“They were cleaning our site last night and noted that there was a burning smell in the kitchen.

“Because they noticed and called for help we were able to avoid what could have been a fire. So, many thanks.”

Leo and Yahani say they were pleased to have helped out. The drama began shortly after they arrived to start cleaning.

“There was an odd smell in the kitchen but at first we thought it was something else, but it kept getting stronger,” Leo said.

“I was worried and called the emergency contact at Farmlands and told them I didn’t want to leave the site until it was sorted out. We were worried it might be a fire.”

Their call brought a Farmlands duty manager and Leo and Yahani tried to help her locate the source of the burning smell.

“She wanted to get them to search the whole kitchen and see if there was a fire hazard. Three fire trucks came and we had to leave the building.

“They searched the kitchen and found one of the fridge motors was really burning hot.”

Yahani said they felt proud to have helped. Later that evening the couple were called by the Farmlands employee who had attended the incident.

“I feel happy we made the decision to call for help,” said Yahani. “She called me later that night to thank me.

“She said it was the right thing to do by calling her otherwise it could have led to a huge fire, according to the fire brigade.”

The next day the couple received chocolates and a thank you card from Farmlands management.

Tony said all CrestClean personnel are trained to keep an eye out for the unexpected. Leo and Yahani’s diligence certainly paid off.

“If they had ignored or brushed it off as nothing the outcome could have been very different.

“It comes down to looking after the customers’ assets and best interests.

“It’s their quick thinking and ability to be smart while they are working that’s paid off and prevented what could easily have led to a very serious fire.”

Leo and Yahani joined CrestClean last year. Both are students studying at Otago University. Yahani, who aims to be a lawyer, is studying law and psychology and Leo is studying IT.

“We love having our own business rather than working for someone else because it gives us the opportunity to control the hours we work,” says Yahani

“We clean all our sites after 5.30pm so during the daytime we have plenty of time to attend our lectures and tutorials and it doesn’t clash with our work.”