Six years ago Harry and Genevra Ficks moved to New Zealand from South Africa. Little did they suspect that they would end up running their own business and turning over more than $100,000 pa in beautiful Invercargill. 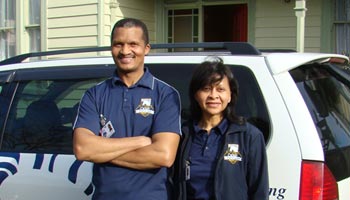 “Six years ago Harry and Genevra Ficks moved to New Zealand from South Africa to make a new start with their family. Little did they suspect that they would end up running their own business and turning over more than $100,000 a year in beautiful Invercargill.”

They started out in Auckland, yet found it expensive and noisy. Genevra had also had enough of working in the finance sector, so when Harry was offered a job on an Invercargill dairy farm they jumped at it.

It was while he was working on the farm that Harry first saw the ad for a Crest franchise and in their words, ‘we haven’t looked back since.’

There were a number of factors that made it a good fit, for Harry it was the guaranteed income, for Genevra the flexibility. Both of them found the purchase price particularly appealing.

“We did look at other franchise options yet they were so expensive. Crest is still one of the cheapest franchises you can buy, and for us, the quickest to see results,” says Genevra.

She started working in the business herself with Harry coming and helping when he could. It only took five months though before Harry was able to leave his job and now the two of them run their franchise as a partner business.

The financial stability Crest offers and the move to Invercargill where house prices are cheaper, means that they are well on their way with saving towards a house – not bad given they only purchased the business in December last year!

“This seemed like it would never happen in Auckland, I experienced life there for a year and would flock south anytime. Plus it’s such a lovely community down here.”

A close knit family Genevra particularly loves that living in Invercargill means she has her boys at home more often. One of her sons is studying Media Arts and Graphics locally.

“It was very convenient for him with so many education facilities down here. We believe that you’re always a family, so no matter what age they are they are the boys are always welcome at home. Plus – he’s saving lots of money by living with us!”

When asked what the hardest thing was about taking on a Crest franchise Genevra has to think hard.

“We’ve been cleaning all our lives, most adults have. Yet when we started there were lots of procedures and processes to learn and I thought how will I get this all in my head?”

“Yet it really is common sense and once I’d realised that, it was a breeze. Plus they give you lots of tools and wonderful things to work with.”

Her favourite aspect is much easier to come up with;

“Having the GST and accounts being done for you. I think it is a great thing Crest offers. The last thing I wanted was to have to be an office all day. Instead Harry and I get to work together in a business we love and somebody else sits in the office with the books.”