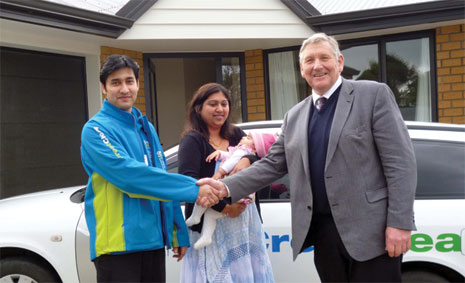 Ashneer, his wife Durgeshni and baby daughter being welcomed to the province by Invercargill MP Eric Roy

Ashneer Datt is a long way from home – Fiji to Auckland might be one thing. But Ashneer made a bold leap when he took his family to the deep south. Starting out on a new career path with Crest, Ashneer accepted Crest’s relocation offer in the process and moved to Invercargill without even seeing the place.

“I had to look at the map to see where it was,” recalls Ashneer. Conceding that he had initial nerves when he saw Invercargill at the bottom of the island – he did ponder the prospect of falling off it!

The move has been truly successful, however. Ashneer has increased his client base from six to 10 in just four months since becoming a Crest franchisee in March 2011. Feedback from happy clients has been so positive, that Ashneer’s prospects look brighter yet. Master of his own destiny, Ashneer now turns over now $80,000 a year, and on a personal level he has potential for another income stream when he invests in property.

Ashneer still owns a home in Manurewa. He lived there for three years after moving from Fiji – trying to get ahead, he was working seven days a week and long hours. That was fine while settling into New Zealand life with wife Durgeshni. But once their daughter was born, life changed and Ashneer wanted at least one day off a week.

“I wanted to own my own business and be self employed, so I looked at the Internet and saw Crest.” While he had cleaned when working in the restaurant industry, Ashneer says commercial cleaning was an entirely new prospect – but Crest’s lure to finance him into his own business was a great opportunity.

After making contact with Crest, Ashneer was put in touch with Invercargill regional manager Glenn Cockcroft, who posed the idea of relocating. Talking only by phone, Glenn gave Ashneer a thorough insight into the advantages. Ashneer and his family even stayed with Glenn for two weeks while he found a place to live.

A Crest convert himself, Glenn has driven a 30% growth in Invercargill since becoming regional manager in November 2010. With eight separate franchises and 18 franchisees now under his guidance, Glenn says there’s huge growth potential in Invercargill.

Crest’s distinctive approach and systems sets the company apart of course – its entire package focusing on support and customer service. Finance is the initial drawcard and for the likes of Ashneer, it was perfect.

“I didn’t have enough money,” he says. “Crest financed me into the business. They also paid $3000 for relocation. I didn’t even look at the place first. I just packed up and came.”

Ashneer did his training in Auckland. Three weeks later, Ashneer was in Invercargill; van waiting, fully equipped, bucket and mop – ready to go. Days start at 3pm at a local school, before moving to a varied customer base that includes offices, a cafe and lab. Handling all the cleaning himself, Ashneer finishes between 11pm and midnight. Saturdays are around five hours, from 1pm to around 9.30pm. He’s never looked back and says Invercargill is a good place to live. He hasn’t found it too cold; says it’s cheaper to live, people are friendly and there’s a lot to do.

Being born and bred in Invercargill Glenn is naturally biased – but you cannot ignore the facts. With a population of 55,000, Invercargill has much to offer. You can travel from one side of the city to the other in around 10 minutes. For the likes of Ashneer, travelling time between jobs is minimal. Housing is less too. Ashneer’s currently renting – a new three-bedroom home, double glazed, with heat pump for $280 a week. But he has the potential to sell his Manurewa home and invest in two in Invercargill.

Free fees at Invercargill’s SIT are another drawcard for families looking for post graduate education and Glenn says lifestyle advantages are huge. Invercargill’s a gateway to everywhere; two hours to ski fields in Queenstown; c lose to deer hunting on Steward Island; oysters from Bluff; fishing on Lake Te Anau and a myriad of other recreational activity around Southland.

You can live near the snow, but not actually have it on your doorstep. Glenn says, contrary to popular belief and being coastal, snow only falls around once every five years. Winter can get cold – but there are fantastic days – and the grass is always greener.

“A lot of people step off the plane in Auckland and think they’re in New Zealand. They don’t know any different or better,” says Glenn. If you consider Invercargill, Crest offers the chance to own a business, be helped financed into it, paid to relocate, start with a ready client base, have all the bookwork done for you – and be nurtured every step of the way by someone who’s passionate about the business and Invercargill.

Ashneer had nothing to lose and everything to gain. He might not have family in Invercargill, but he and Durgeshni are making friends and looking to the future in their new home town. His advice: Don’t worry. Go for it. “Leave everything to Glenn!”