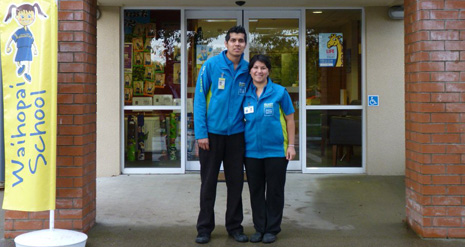 Richard Chand and Akhtar Juanmiry have had quite an adventure over the last 18 months.

They participated in CrestClean’s Move to the Regions Programme, and elected to transfer from Auckland to Invercargill, commencing in March 2012.

Richard and Akhtar had lots of memorable first impressions of Invercargill. They were taken at how the land was so much greener than what they were used to, and how compact the City is.

As part of their introduction to our Southern-most city, Regional Manager Glenn Cockroft took them to the top of Bluff Hill to experience what a true Southerly feels like from Foveaux Strait!

It was also the first time that they had seen or experienced real snow, and Akhtar spent an hour outside to appreciate it up close.

The move has been a good one for many reasons.

Among them, there is less traffic and it only takes them 5 minutes to get to work compared to the hour that it used to take in Auckland.

Living costs are much cheaper. As an example, they are able to rent a bigger and better home for much less money.

With the daily travel time greatly reduced, they also have much more time to do the things that they enjoy in their leisure time.

Richard is Captain of a local Soccer Team, and is Volunteer Coach for a Soccer Team at Waihopai School.

Akhtar has become a self-confessed gym bunny, and loves shopping in Invercargill where prices are cheaper than Auckland in many instances.

The journey has been rewarding in many ways, and Richard sums this up by saying

“Joining CrestClean has given us the best opportunity. I like the fact that there are always people to support and look after you, and that you are not left on your own.”

Read more about CrestClean’s Move to the Regions Programme.