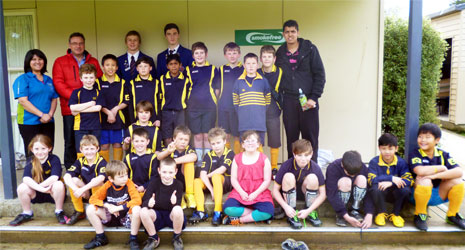 March 2012 saw Richard Chand and partner Akhtar Juanmiry move from Auckland to Invercargill and take up the contract to provide both Caretaker and Cleaning services for Invercargill’s Waihopai Primary School.

Invercargill Regional Manager, Glenn Cockroft is very pleased with Richard and Akhtar, “The work that they do is very much appreciated by all of the staff and students alike at all of their schools”.

“Richard and Akhtar operate a very successful Franchise in Invercargill and have grown from strength to strength since they arrived,” he says.

Richard has always had a strong interest in Soccer and soon after his arrival he volunteered to take on the coaching role for the Waihopai School Soccer teams. It’s a good thing that he did as he has helped the team take home the 2013 Tri-Nations Cup.

Each year the Tri-Nations are held between 3 local schools – Waihopai, Windsor North and Middle School. Teams compete playing soccer, rugby and netball and the team with the most winning points by the end takes home the much treasured, Tri-Nations Cup.

Prior to Richard taking on the coaching role, Waihopai had not held the cup for 5 years. Last year with the soccer team under his guidance they won all games without a single point being scored against them and as a result, Waihopai took home the Cup.

This year, on Friday the 20th of September the battle was on once more with all three schools gathering on the sports grounds at Waihopai School to compete again for the Cup.

By the end of the day – Waihopai was once again undefeated on the Soccer field with not one point being scored against them – and plenty of points under their belt.

Waihopai School once again has the Tri-Nations Cup proudly on display for all to see.

Congratulations, Waihopai and well done for all of your hard work Richard!