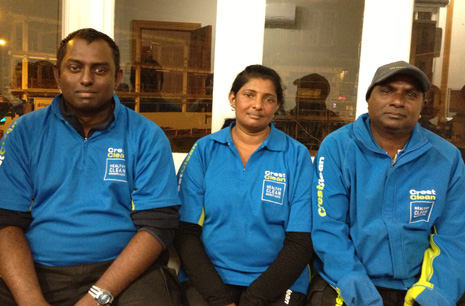 Christchurch North is pleased to welcome new franchisee, Vasu Dewan. Based in Rangiora, Vasu works with his wife Muni and son in law, Sanjeeve.

Vasu arrived from Fiji in 2007 and lived in Auckland until the Canterbury earthquakes hit in 2010 and 2011 and he decided to move down to the devastated city and help out. He is a qualified builder and is now helping to re-build the city of Christchurch.

His contracts include Ashgrove School and Lane Neave Lawyers. Yasa says that being based in Rangiora “gives us the opportunity to pursue bigger and better opportunities”.

“Nothing is too big for Vasu’s team” Yasa says proudly, “I can see a bright future for Vasu at Crest and would like to welcome the whole team to Crest”.

Welcome to the team Vasu, Muni and Sunjeeve – all the best!