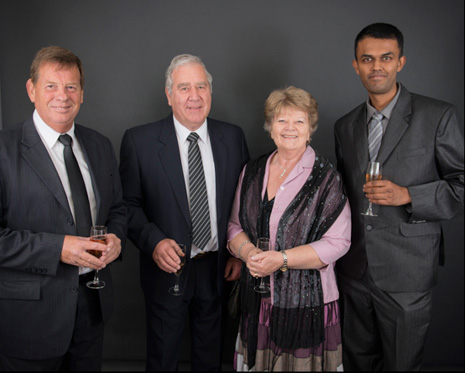 Northern Arena, one of our big customers, invited Crest to sponsor this charity event, which Crest was happy to support. Crest personnel from North Harbour joined around 200 guests at the Orewa Arts and Events Centre on September 28 for the fundraiser.

In New Zealand and Australia, one in three people are affected by allergies, some of which have the potential to be fatal. Guest speaker Donna Freeman told the poignant story of her brother Grant Freeman, the Marketing Manager of Chelsea Sugar who passed away due to a severe allergic reaction in 2007.

Aware of his allergies to peanuts, tree nuts, eggs, seafood, and chicken, Mr Freeman passed away two days after having an unexpected allergic reaction to a raw-tomato dish at a café.

Dean Kent, the head swim coach from Northern Arena, spoke about the battles his son Connor has with allergies. The entire family had to change their life, diet, and habits to protect him.

Allergy New Zealand places a strong focus on overcoming adversity, which Peggy Bourne-Mitchell spoke of enduring after losing husband Possum Bourne in a rally crash in 2003. She also told interesting tales from her life as a missionary child growing up in Africa.

Activities on the night included a silent auction for prizes such as a signed 2013 All Blacks jersey, an Eden Park corporate box, and a stay at Kauri Cliffs resort. Guests were treated to canapés and bubbles followed by a three-course meal.

If you would like to learn more about Allergy New Zealand, please visit www.allergy.org.nz