From Auckland to Rotorua with CrestClean 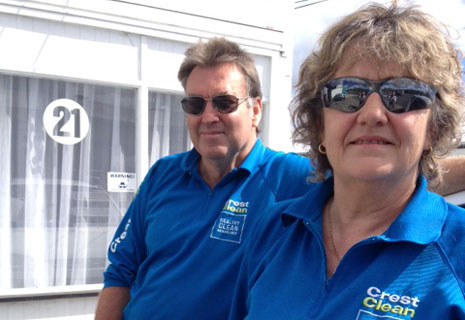 Relocating cities can be a daunting experience, but two eager CrestClean franchisees have done just that and two years down the track- Keith and Donna Carter are loving their new lifestyle.

When Keith and Donna joined CrestClean two years ago, they left behind the big city lights of Auckland and settled into the more ‘fragrant’ city of Rotorua.

“The decision to move was an easy one,” Keith says, “We were both living in Auckland when we saw an article in the newspaper to join CrestClean in Rotorua and we both liked the city, so we decided to move.”

It was a big step for them both and Keith says it took time for them to settle, “It was scary moving, and took a fair bit of organising but we are settled now.”

He says they both enjoy living and working in Rotorua. “It is a lot quieter and less stressful than living in Auckland,” he says.

“We love working with CrestClean, of course we would like to expand our business, but we are very happy at this stage.”

The New Year brings exciting times for the pair, with Donna heading to Chong Ghing in Northern China to visit relatives. Although Keith will stay in New Zealand to look after the business, he says “Donna is very excited about the trip and can’t wait to catch up with family.”

Regional Director, Bill Douglas says he is delighted to have them both in Rotorua, “They are such a great pair- hardworking and always so conscientious with all of their customers. They are doing very well and I wish them a safe trip in the New Year.”