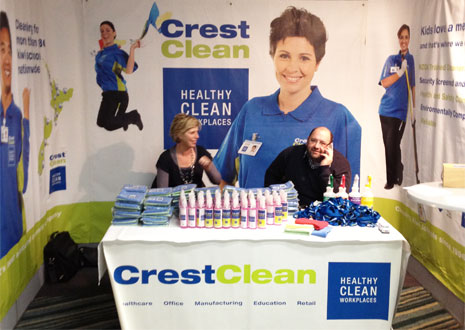 Regional Directors from Wellington, Hutt Valley/Wairarapa and Palmerston North/Kapiti Coast attended the conference and have all said it was a great event and a good opportunity to network the CrestClean brand.

There were in excess of 80 schools at the conference and CrestClean was once again well recognised by the delegates. Hutt Valley/Wairarapa Regional Director Clare Menzies says, “We all received a large number of positive comments from the schools that we currently clean and lots of requests from other schools for quotes.”

The conference was held over a two day period and Wellington Regional Director Andrew Alleway says, “We saw at least 90% of the delegates which was a fantastic result.”

Andrew says that the CrestClean sanitiser and microfibre cloths were a huge hit. “We were told by the delegates that they love them,” he says.

Palmerston North/Kapiti Coast Regional Director Steve O’Connell says, “The Kapiti Coast region is experiencing a bigger request for information from schools due to the conference. A lot of principals were interested in finding out more about the new Health and Safety Policies and Procedures as they play a huge part in the running of New Zealand schools.”

The conference was a great success and was an excellent opportunity for the Regional Directors to network and meet new Principal’s as well as catch up with the Principals of the schools they already work with.