Livin’ the Good Life in Ohope 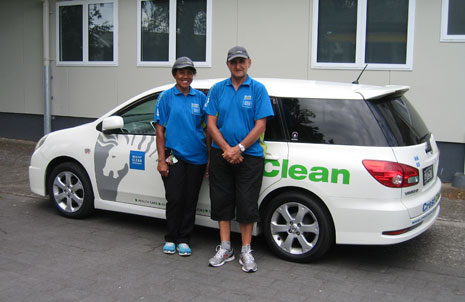 The good thing about owning a CrestClean franchise is that you can make it work to suit your lifestyle. A great example of a franchise team doing just that is David and Louisa Hayward from Whakatane.

David left New Zealand in 1974 for the Solomon Islands on a one-year work contract, but ended up living there for 38 years! It was during this time that he met and married Louisa. They soon decided it was time to return to New Zealand and settle down in a peaceful township.

After being away from New Zealand for 38 years, David returned in December 2012 with his wife, Louisa to settle into their new home on Ohope Beach, about six kilometers East of Whakatane.

“We purchased a property in Ohope as it is close to my family ties and we couldn’t resist the climate and nearby golf and fishing spots,” David says.

When the time came to consider purchasing a business- a CrestClean ad sparked their interest. “We wanted something to keep us busy, but also allow us to live a relaxing lifestyle. We researched CrestClean and decided it was perfect for us,” he says.

“We moved to Ohope towards the end of 2012 and have since settled into the lifestyle we hoped for. CrestClean has been a godsend for us,” David says.

In the Solomon’s, David worked in the automotive industry and owned an automotive repair business and Louisa worked in the hospitality industry. This business experience inspired them to join CrestClean and helped them to successfully launch their new business in Whakatane.

“Louisa was skeptical of leaving the Islands at first due to the climate, but lucky for us, New Zealand has been having very mild winters, so we are both settled in and couldn’t be happier here,” David says.

Louisa has been enjoying playing golf and was named the Ladies Stroke Champion of Ohope in 2012. David says they are planning to travel around New Zealand and Louisa is excited to play on different golf courses as they go. David says, “After being away from home for so long it’s good to be home. After all, home is where the heart is.”