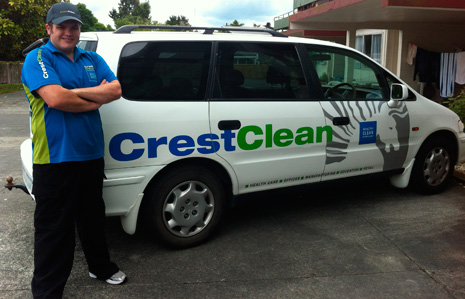 Recently there’s been a lot of talk about the new Pure Water Window Cleaning System that CrestClean offers. Hamish McGregor has been with CrestClean since June 2013 and has already decided to invest in the new system.

It didn’t take him long to see the potential in the new Pure Water Window Cleaning System. He says, “I think it’s good to be able to offer customers a few extra services as they can then rely on one contractor (or franchise) to take on more of the work, rather than try to coordinate days and times between different contractors. This allows them to deal with a single invoice too, which is always easier.”

Hamish, originally from Havelock North in the Hawkes Bay, now lives in Taupo. He says he spent a lot of time in Taupo over the summers so he knew what he was getting himself in for. “I enjoyed the atmosphere in Taupo and it didn’t take long to get to know the township,” he says.

He enjoys living in Taupo as he says, “A few events here and the holiday crowds mean there is usually a good flow of people passing by, but there are still quiet times which is good. Also I quite like that Taupo has a lot to offer with the ski fields, lake, and sporting events.”

For Hamish, joining with CrestClean has been great, as he loves working for himself. “Before CrestClean I worked in the hospitality industry and there were some aspects of the job that made me want to get away from being an employee to working for myself. There is a good group of us in Taupo and we have a great Regional Director so it works well here.”

Investing in the new Pure Water Window Cleaning System is just the beginning for Hamish as he wants to get into carpet cleaning too. His attitude is a good one; he believes that CrestClean provides a great system to develop your business in. He says, “With CrestClean, you get out what you put in.”