Competition Heating Up for Cleanest Classroom 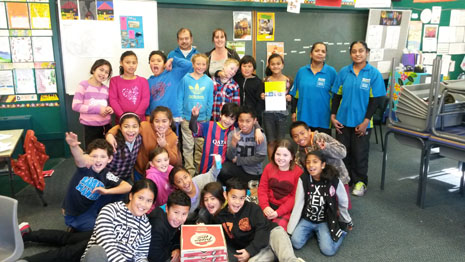 It was a pizza party for Room 9, with Wellington Franchisee Jiten Narayan and his Crest Team.

Students in Room 9 managed to beat the competition for Cleanest Classroom at Rangikura School in Porirua and got to chow down on pizzas as their reward.

Wellington Crest Franchisee Jiten Narayan and his team clean the Rangikura School and awarded the prize pizzas to the students. “The kids are really interested in it,” he says. “They learn how to keep their classroom clean by picking up straightaway and not leaving it for later, wiping their desks as they go, and using the rubbish bins, and for that, they get pizza, which they love.”

Rangikura School Principal Eddie Uluilelata says the competition has added to the school’s larger cleaning initiatives, which include more recycling and reducing food waste. “It’s part and parcel of trying to get the kids to respect property and respect their surroundings. Kids thrive on incentives and competition and this is a positive way to get them to tidy up before they leave for the day.”

Now that it’s been going on for two terms, competition has been heating up. “There’s been talks of sabotage, sneaking through peoples classes dropping rubbish,” Principal Uluilelata adds with a chuckle.

Jiten says they’ll definitely keep awarding the pizzas. “You can see the changes and the rooms that are getting better. The kids are putting more focus on it. All the classrooms are competing now and it’s getting tougher to judge and that’s a good thing. And we noticed that even when the competition is finished they keep looking after their classrooms.”