Crest Cleans Up at Conference 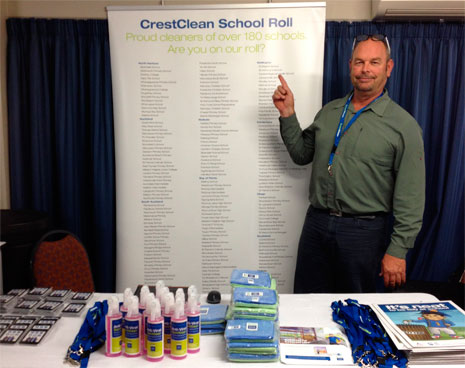 Regional Director for Hutt Valley and Wairarapa Clare Menzies was also among the 100 delegates who attended the two-day conference for primary school principals at the Mercure Hotel in Wellington’s CBD. CrestClean was provided with a table space at which free school posters, sanitiser bottles and cloths, and lanyards were distributed, as well as information about Crest’s school cleaning services.

“These conferences are good for all regional managers,” says Steve. “I love meeting people face to face to go over the products that we can offer them, especially the new Health, Safety and Environmental Management System.”

Schools have become a rapidly increasing client base for Crest, with the past year seeing the number contracting cleaning services jump from around 180 to 252, as of June 2014.