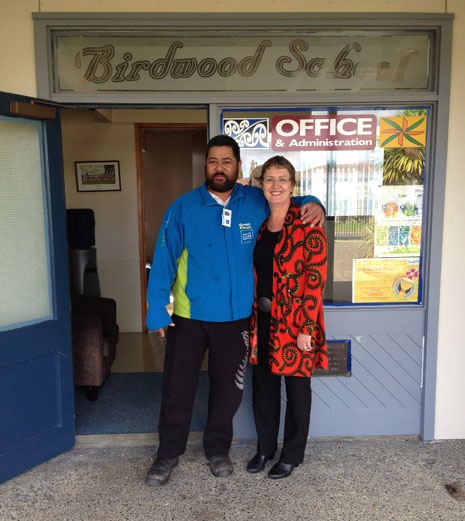 For 18 years, Faleni Apati had a fine skilled trade as a welder, however when his wife’s uncle offered him a partnership in a West Auckland CrestClean franchise, he decided to give it a try. Seven years later, he says he enjoys cleaning as much as he did welding.

“If you put your heart into something, you will love it,” says Faleni, who goes by “Puti,” and is a native of Tuvalu, but raised in Fiji. “The way I used to love welding, now I love cleaning, but that is what happens if your heart flows into something. All my life I’d been welding and now I forget about it!”

In addition to a positive philosophy about work, he says having a large family also motivates him. With seven kids – six boys (including a set of twins) and one girl – he says the big household is a driving force. “That’s why I work hard!” He laughs heartily.

His hard work isn’t taken for granted. He recently became the Certificate of Excellence prizewinner for his region, which is given to the Franchisee who receives the most Certificates of Excellence in a quarter, and it comes with a $50 cash prize. West Auckland Regional Director Caroline Wedding says it was a complete joy to be able to reward Puti’s work, in particular at one of his large daily contracts, Birdwood School.

“Birdwood School loves Puti and he loves the school equally,” she commented.

Providing better educational opportunities for his children, aged 5 to 17, was the reason Puti and his wife moved from Fiji to New Zealand in 2007. “In Fiji, we had a little bit of struggle,” he confesses. “So my wife and I decided to move and we’ve never regretted it. I really miss home – there’s no place like home – but for the future of the children, we put aside what we like in order to put them first, so they don’t have to go through what we went through.”

Puti clearly expresses a deep regard for the importance of family, which includes the CrestClean community.

“I just want to thank Crest for supporting our family. The management and staff are so friendly and easy to talk with and when Franchisees get together, it’s more like family. We are like one big family.”