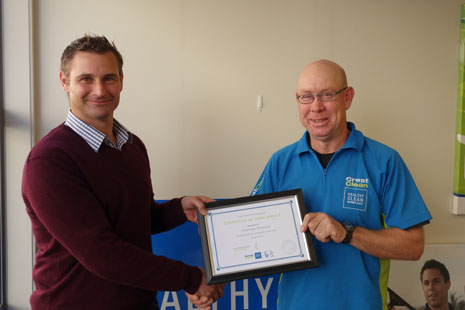 Murray Strutton has always been a specialist of sorts, first as a professional restorer of vintage cars and now as the go-to guy for Pure Water Window Cleaning in Tauranga.

In the five years that Murray has been a CrestClean Franchisee, he says one of the biggest changes for him has been seeing a new window cleaning method that he tested and pioneered with his Tauranga contracts become a Crest-branded service used throughout New Zealand.

CrestClean’s Pure Water Window Cleaning had its first run in Murray’s hands at Metlifecare’s Greenwood Park Retirement Village in Tauranga, and was born out of necessity for him.

“About three and a half years ago Crest had the contract to do all the windows at Greenwood Park MetLifecare. There were about 260 houses in the retirement village and they used to send in a team of people to do the windows.”

Finding an easier method to clean windows without needing scaffolding and multiple people became Murray’s priority and that was how he came across the purifying machine and water-fed extendable poles that he introduced to Crest. They are now the backbone of the Pure Water Window Cleaning System.

“It was a necessity because of all the two to three storey buildings around here. I took the plunge and haven’t looked back,” says Murray.

Neither has CrestClean, which now has 23 Franchisees throughout New Zealand using it. The cleaner, more economical and faster window cleaning method has created a boom in business for Tauranga’s Regional Director Jan Lichtwark, who recently signed on nearly a dozen new window customers and has a second Franchisee operating the system.

Though Murray still commercially cleans for several large contracts, he ultimately hopes to do window cleaning exclusively – once again becoming the specialist he was when he moved here from London in 2000.

Murray grew up about five miles from Windsor Castle and moved to New Zealand because his wife was from Mount Maunganui. With a background in mechanics, while living in London he managed a busy accident repair centre, which prepared him to establish a vintage auto restoration business here. Specialising in high-end restorations that could take as long as a year to complete, he wasn’t able to drum up enough sustainable business and decided to try owning a CrestClean franchise instead.

“I’m a creative person and the entertainment for me is trying to build the business,” he says. “The urge to grow keeps me interested.”

Having a Regional Director that supports his endeavours has also been a big help for him over the years. “Jan is the best thing that ever happened to the Tauranga area,” he says. “We’re very lucky to have him because of the support he gives and the interest he takes in pushing forward and growing. Having a good manager is a big part of having a good CrestClean franchise.”