Ten Years for Rajesh and Paidammi 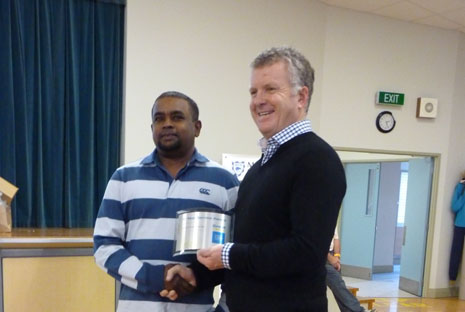 It’s been ten years of growth and change for Rajesh and Paidammi Mani and CrestClean.

“When I started it was just you and the mop and the bucket,” Rajesh says of his early days with the company. “Now there is more training and new chemicals and machines making it much easier to do the work.”

“People are lucky when they join now it’s easier for them because they can get so much training. It develops the skills,” he adds. “There are so many managers and quality checks to keep you on your toes, but when you do your job properly you don’t have to worry about anything.”

Rajesh and Paidammi emigrated from Fiji in 2003 in order to be closer to their son and Paidammi’s parents, who already lived in New Zealand. Initially, Rajesh worked as a courier, but within three months he met with a Fijian friend and former Crest franchisee who spoke so highly of the opportunity, Rajesh decided to purchase his own business.

It was a big change from his previous career as a Fijian Customs Officer for 21 years. “It’s a different job but I’m so used to it after ten years. I’ve adjusted myself from pen and pencil to vacuum and mop,” he says.

And in those ten years his business has grown from $50,000 to approximately $185,000 in turnover, bolstered by the additional window and carpet cleaning services he’s added. Villa Maria and FedEx are among his larger contracts and he’s currently the sole franchisee in South and East Auckland operating CrestClean’s new Pure Water Window Cleaning System, an innovative, safer and cleaner method for cleaning windows above ground level.

As for what he likes about working with Crest, Rajesh says, “It’s a company that looks after you very well. The managers keep reminding you how to improve.” That’s something he thinks the customers pick up on and appreciate, noting that many of the clients he’s had over the past ten years are still with Crest. “Once you perform your job properly the client will not run away from you.”