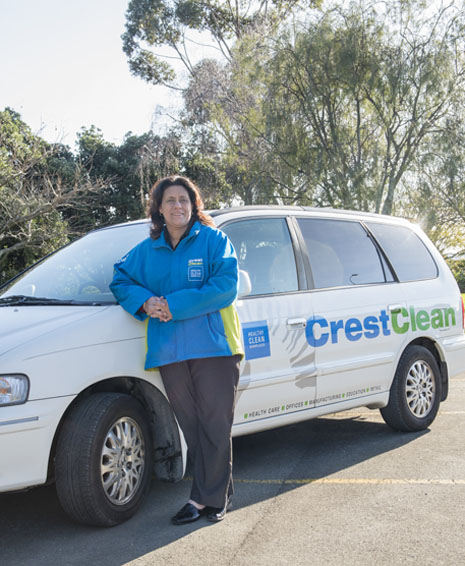 Regional Director of Nelson, Barbara de Vries, is ready to expand her business into the Blenheim region.

It’s been a busy year for Barbara de Vries. Just fifteen months after becoming Regional Director of the Nelson area, Barbara has taken on the additional role of Regional Director for Blenheim, and is excited about this new challenge.

Although Blenheim was previously covered under the Nelson region, Crest felt it would benefit from its own identity. Barbara agrees, as the new region allows her to bring a more personal touch to the area.

The opportunity to expand into Blenheim came up via a customer referral. The Marlborough Kindergarten Association in Blenheim was looking for a new cleaning company that could keep their premises spic and span. The Nelson Kindergarten Association was so pleased with the service they receive from Barbara’s team, that they were happy to refer Crest as a great service provider.

She already has a stellar team onboard with Franchisees Shajahan Pullurchangattil and his wife Sunaina Shajahan. They are looking forward to running their own business taking care of four kindergartens and one office block. After successfully completing training with Crest, Shajahan and Sunaina are eager to apply their knowledge in providing high standards of cleaning and hygiene for their customers.

Prior to Crest, Barbara worked as a sales rep for a small goods company. She bought a Crest Franchise from one of her relatives and held down both jobs for about six months. However, cleaning in Taupo with Crest after travelling around the middle of the North Island five days a week took its toll.

Keen to pursue a career with Crest, Barbara was happy to leave her sales rep days behind her. She worked in Taupo for two years before selling the business to move to Rotorua, where she owned a franchise for three years. When given the opportunity to become Regional Director in Nelson she jumped at the chance to relocate to a city that consistently tops the list for annual sunshine hours. When asked what she loves most about Nelson, she says, “The climate!”

Barbara is passionate about Crest, and loves the opportunity the business provides her to help people to achieve their goals. She also relishes the chance to work with a lot of different people and to grow within the company.