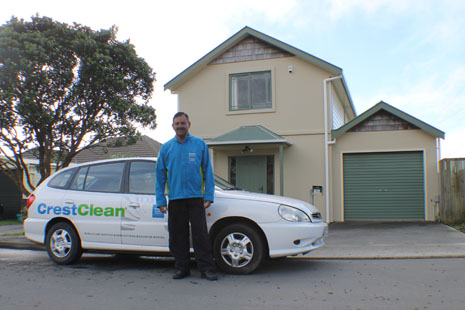 Nityanand Sharma never expected to be able to purchase his own home, especially not in the high-priced Wellington region, and certainly not within a year of buying a CrestClean franchise.

However, two weeks ago he moved into his new house in the Wellington suburb of Johnsonville. “If I didn’t have a Crest franchise, I wouldn’t have been able to do this. I never thought I’d buy a house in New Zealand, and it’s very expensive in Wellington. Crest is the best!”

Nityanand says CrestClean has changed his life. He was renting a house with his son and thinking he’d never be able to afford his own home, when he came across CrestClean on the Internet. He borrowed the money to purchase a $50,000 franchise and has already paid back the bank loan. His success convinced his son, Nilesh, to buy a franchise, as well.

“Instead of sitting down with a bottle of beer in front of the TV every evening, I said to him, ‘Let’s go do some cleaning,’” says Nityanand. “It doesn’t feel like hard work, even at the age of 59.”

In fact, he says, it’s keeping him healthier than ever. “I was a member of a fitness club and now cleaning is my gym. I don’t have to waste money on that. I’m keeping my house clean, I’m keeping New Zealand clean, and I’m getting paid to do it.”

Nityanand worked for 36 years as a police inspector in Fiji. Four years ago, after he retired, he decided to move to New Zealand and once he arrived began working as a caregiver, which he still does during the day.

He also says the Admin Services based in the Dunedin office are “so efficient and helpful. I have read about other franchises, and I don’t want to put them down, but I think Crest is the best one.”

His goal is to transition slowly away from caregiving as he continues to build his CrestClean business.

“Now my son and I, we’re having a little competition,” says Nityanand. “He’s just 30 years old and I’m almost 60, let’s see who reaches $150,000 turnover first…but if he does first, then I will go for a quarter million.”