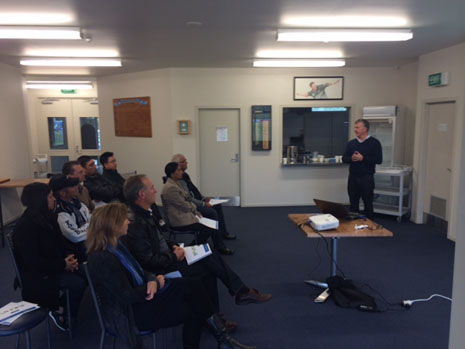 CrestClean has grown steadily since its inception in Dunedin back in 1996, and now operates in 24 regions throughout New Zealand. Whangarei is one of the newer areas of expansion and recently the four dedicated franchisee teams from the Northland gathered for their first team meeting with CrestClean’s Managing Director Grant McLauchlan.

“It went really well,” says Neil Kumar, Regional Director for Whangarei and North Harbour. “We had 100 percent attendance and Grant was there to share news and information about the company, which was really good for my teams to hear.”

Neil says growth has been slow but steady since he took on the region about a year and a half ago, but he’s excited to announce a fifth franchisee from Kerikeri will soon be starting.

Grant McLauchlan, who has been busy over the past few months traveling to each region individually and hearing about CrestClean operations from franchisees, has only good things to say after meeting with the new region. “CrestClean Whangarei and surrounding districts are destined to have a very positive future,” he says. “From market intelligence and customer feedback received we believe the region has been very poorly serviced historically and Neil has done a great job of building a solid foundation to date.”