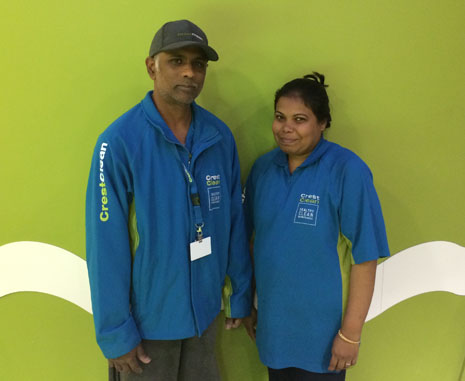 When Ashveen and Kamini Raju borrowed $20,000 to purchase a CrestClean franchise, they set themselves what sounds like an impossible goal – to reach $150,000 turnover in a year.

Nine months on, the Rajus are nearly there, with $130,000 turnover and 18 customers keeping them amongst the busiest franchisees in North Harbour, where they live with their two young children.

Regional Director for North Harbour and Whangarei, Neil Kumar, says the ambition of his new franchisees reminds him of himself when he first started with CrestClean. “I can see in them the same positive attitude that my wife and I had when we were working for Dries Mangnus in Auckland,” says Neil. “It’s just their attitude and their willingness to work together. It’s working for them.”

Ashveen says starting a cleaning business had been on his mind for several years. He and Kamini moved to New Zealand from Fiji about nine years ago and his first job was as a production manager for Hendersons Fine Foods, where he worked for eight years. He was also doing a little part time cleaning with a friend who owned a CrestClean franchise. Because CrestClean had a good reputation among his friends, he mustered the courage to ask his boss at Hendersons for a $20,000 loan to purchase his own franchise.

He’s overjoyed by how quickly his business has expanded. “It’s growing every two weeks,” Ashveen says. His customers have more than quadrupled, from 4 to 18, and many of them have also expanded the scope of his work. For example, one customer had him cleaning one office and now has him cleaning three.

He thinks his rapid success has to do with his attention to detail and quality control. He makes a point of taking the last ten minutes at every job to look over his work and ensure he’s done everything correctly, and isn’t afraid to chide his wife on her work, as well. “She gets a little angry, but we’re getting along,” he says with good humour.

To that end, the Rajus recently completed a Hard Floor Care Training Course, which gives them another profitable service to add to their business.