Three Years After Auckland, Life is Great in Invercargill 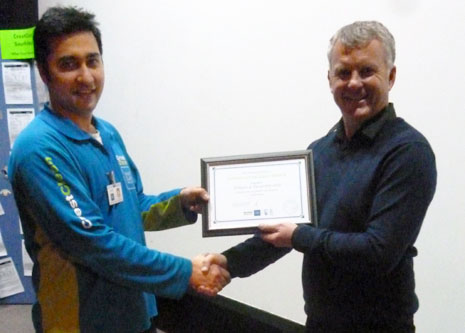 Three years ago, Ashneer and Durgeshni Datt broke away from the hectic pace of Auckland and took a chance on a CrestClean franchise in Invercargill, hoping they’d be able to enjoy a more laid back lifestyle in the deep south.

“I’m very happy with the decision to move. It’s much quieter here,” says Ashneer, though you wouldn’t know it as he speaks over the background chatter of his young children playing on a beautiful afternoon. “But that’s nice. I’m from a quiet place back in Fiji.”

Being around his kids during the day is just one of the added bonuses of the shift from Auckland to Invercargill. Fantastic scenery and affordable housing were some of the other factors that helped with the young family’s decision to relocate – as was the opportunity to purchase a CrestClean franchise, which came with financing and relocation assistance.

“I didn’t have enough money,” Ashneer recalls. “Crest financed me into the business. They also paid $3000 for relocation. I didn’t even look at the place first. I just packed up and came.”

While in Auckland, Ashneer was working three jobs to keep the family above water and had little time to spend with his wife and children. Now, in Invercargill he has a more comfortably paced lifestyle, while still turning over more than $100,000 a year in business. Owning a CrestClean franchise has also given Ashneer and Durgeshni more time to spend with their two fantastic children.

“In Auckland I was working seven days a week and I’d just come home and eat and sleep and go back to work,” Ashneer says. “Now, I’m earning more money and spending more time with my family.”

He’s now planning to purchase a house and he credits Regional Manager Glenn Cockroft for helping to make Invercargill a place where he feels like he can put down roots.

“Without the support of Glenn I’m not sure I would have made it to three years. We have a really strong team and everyone helps one another. That is one of the things that motivates me to stay with Crest, because of the good thing Glenn has built down here.”

For example, he says, last year he lost a family member. “I had just eight hours to sort out everything and fly back to Fiji. Everyone helped, taking over my jobs for me, so that I could go and not have to worry about my customers.”

In addition to growing his business over the past three years, Ashneer was also recognised as Invercargill’s Franchisee of the Year in 2012. In 2013, became a Regional Trainer – “another tick for my CV,” he says proudly. At a recent Invercargill Team Meeting, he also received his 3 Year Long Service Award from CrestClean Managing Director Grant McLauchlan.

Invercargill Regional Manager Glenn Cockroft says of the ambitious franchisee, “Ashneer has quickly shown his ability to not just run his own business, but also to train others. He’s very well respected by the other franchisees that he has taken through their training.”