Conference a Win-Win for CrestClean and Te Mata School 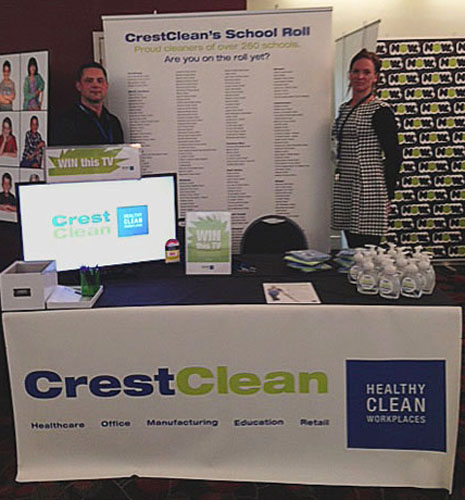 Attending the Hawkes Bay Primary Principals’ Conference for a second year in a row resulted in even greater benefits for CrestClean, says Regional Director Abby Latu.

Held over three days in August at the Wairakei Resort Taupo, the conference draws representatives from over 60 schools. CrestClean is a Bronze level Business Partner of HBPPA and has been involved in the conference for two years.

“It was great last year and it was even better this year, as people recognised me and remembered me from the year before and in a place like Hawkes Bay, it’s all about who you know and who you trust,” says Abby. “The president of the HBPPA is the principal of one of the schools we clean and he sings our praises and is a great advocate for us.”

CrestClean was one of 16 exhibitors and had a new, updated School Roll Banner, which now lists 262 schools cleaned by Crest, as a backdrop for the exhibition table. Abby was joined by CrestClean’s National Sales Manager Chris Barker, who helped give out information about cleaning services, samples of Crest products, and encouraged people to enter a draw to win a new 37-inch TV.

“We had loads of fantastic conversations and I got 12 leads. It was definitely more productive this year,” notes Abby. “And, it was a lot of fun. We were able to listen in on some guest speakers who were very educational and inspiring.”

The TV was won by Te Mata School, a primary in Havelock North, and the prize was accepted by Deputy Principal Heather Wilkie. Congratulations on the lucky win!