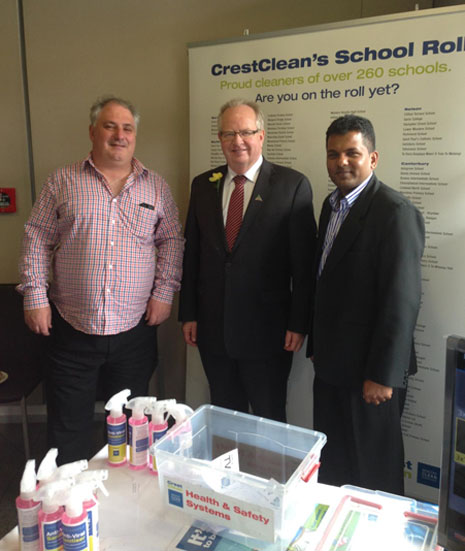 “I really enjoy getting a chance to see people in less formal settings where it’s possible to talk a little more than during the busy working day,” says Dries.

He and Viky Narayan, Regional Director for South and East Auckland, recently attended the MPA’s Conference where CrestClean hosted an informational table and distributed samples of our sanitising products. Attendees included principals and their leadership teams from the many schools in the Manurewa/South Auckland region, several of which are clients of CrestClean.

“I had a great time talking with New Zealand Principals’ Federation president, Phil Harding, who gave a presentation, as well as principals from many Auckland schools. It was a really nice conference,” says Dries.

There are more than 260 schools throughout New Zealand that are cleaned by Crest, all of whom are listed on the large new School Roll Banner, which was on display at Crest’s table, along with a brand new Samsung LED screen TV. Sponsored by CrestClean South and East Auckland, the TV was in a draw won by The Gardens School, a Manurewa primary.