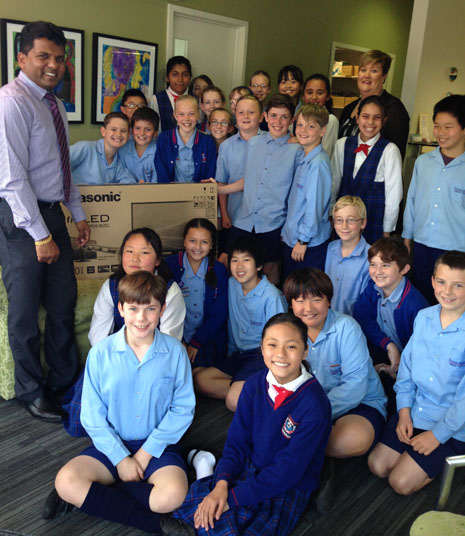 Another lucky school won a new TV from CrestClean at the Howick Pakuranga Principals’ Association Conference on the 11th of September.

Held at the Stamford Plaza Hotel, the conference was attended by East Auckland Regional Director, Viky Narayan, who staffed a table with samples of CrestClean’s products and information on cleaning services, as well as a special draw to win a new TV.

Sunnyhills Primary School was the lucky winner of the TV, drawn by HPPA President Diane Parkinson.

Viky was made to feel like quite a winner himself, receiving an enthusiastic welcome to the event, which was attended by several dozen principals and school staff from the region.

“Crest was highly spoken of among the principals at the conference,” says Viky. “Brent Jenkin, Principal of Wakaaranga School, was MC for the day and his exact words when he introduced Crest were: ‘My school was not clean until Crest took over and, believe me, it’s not only clean, but very clean. What a difference.’”

Wakaaranga was the first new school cleaning contract for East Auckland after Viky became Regional Director in March. “The conference was a great success and I managed to get several new quoting opportunities from attendees,” says Viky. “Plus, it’s very exciting to be able to give away a prize such as a new TV, which will be put to good use at Sunnyhills School.”