Training Course a Knockout for Kapiti 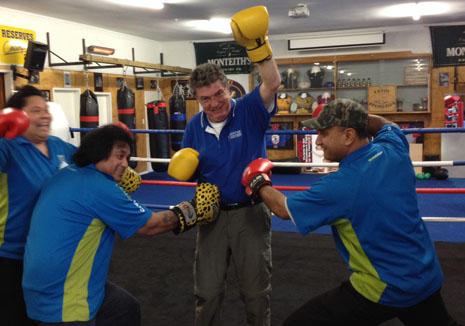 The gloves were on for a bit of fun after a recent training course for Kapiti Coast’s CrestClean team.

“We held the training course at the Kapiti Boxing Club,” says Steve O’Connell, Regional Director for Kapiti Coast and Palmerston North. “It was an interesting venue to clean, with lots of Paraparaumu and All Blacks rugby memorabilia.”

“I’m treasurer and on the fundraising committee at the club, which does a lot of outreach bringing the youth of Kapiti together,” says Steve. Though the club has been in operation for a while, about a year ago it moved into the Paraparaumu Rugby Club’s building and launched a new sports academy for kids.

“We had a bit of fun with the franchisees after a couple of long days of assessments, at which they all did excellent work,” says Steve. “I’m very proud of my Kapiti team.”