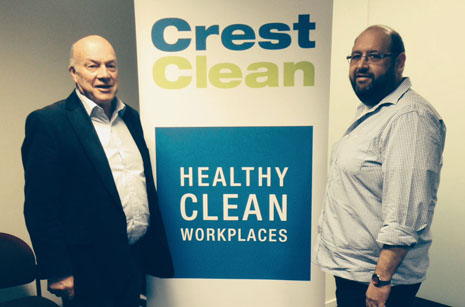 Richard Brodie, left, is the new Regional Director for Wellington, taking over from Andrew Alleway, right, who is moving to Scotland with his family.

A new Regional Director for Wellington, Richard Brodie, has joined the CrestClean team. He brings several years of business management and customer service experience with him and is looking forward to adding to the region’s many successes.

Richard is taking over for Andrew Alleway, who joined CrestClean five years ago as the inaugural director for the region when it was established. Andrew is leaving the company for new opportunities overseas, moving to his wife’s native Scotland with their twin toddlers.

“Working with Crest has been an amazing journey for me,” says Andrew about his departure. “Being the inaugural Regional Director and taking the business from zero to over 250 customers was such a great personal achievement and I’ve met some outstanding franchisees because of it. It’s changed my perspective on cultures.”

However, he adds that Wellington franchisees and customers can expect a smooth transition. “CrestClean will continue to look after you with a new point of contact, Richard Brodie.”

Richard’s previous position was six years as business manager for Mountain Safety Council, where he gained valuable experience in the not-for-profit sector. Prior to that he worked in Christchurch and abroad for an IT company, which eventually brought him to Wellington. Originally from Hawkes Bay, he and his wife, Jan, owned and operated a retail furniture business for 14 years. They live in Wadestown and have two children in Wellington universities.

He discovered CrestClean through a friend and became interested in the business model. “By pure luck, Grant McLauchlan (CrestClean’s Managing Director) was in Wellington and I was able to attend his team meeting with franchisees and hear his annual presentation about the company. Then I went to Tauranga and Auckland and met more franchisees and Crest customers and, the fact is, I never found one minus, which is amazing. Everyone I met was extremely positive about the company.”

In the five years since CrestClean’s Wellington office was established, it has grown to nearly 30 franchisees and over 250 customers, servicing the greater Wellington region.

Richard says he’s eager to learn more about the company and broaden Crest’s base in the Wellington CBD and Porirua. He’ll spend the coming weeks shadowing Andrew, meeting customers and franchisees and learning Crest’s systems.”

CrestClean wishes Andrew Alleway best of luck and welcomes Richard Brodie to the team. Richard may be contacted at 027 439 2424 or richard@crestclean.co.nz.