Invercargill Planning Ahead – Way Ahead 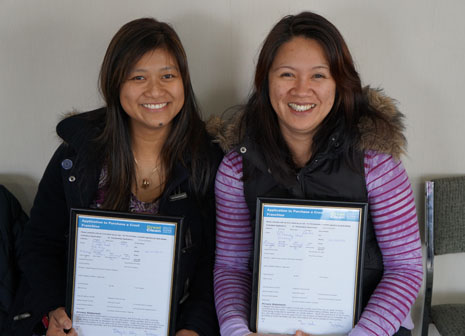 CrestClean’s Jackie Batoy and Julie Cacdac with New Franchisee applications already filled out and ready to go for when their new babies turn 18.

In the past two months, two franchisees from the team have given birth. Jackie Batoy has a new baby boy named Anthony Junior and Julie Cacdac has a daughter named Lovi.

To celebrate the births, Glenn presented them both with framed New Franchisee Applications with the names of their babies already filled in, pre-dated for 18 years from now.

“To save time, I filled out the application forms with the babies’ names – and dated them for their 18th birthdays when they would be eligible to own a business and become the next generation of Crest franchisees in the area,” says Glenn.

He presented the applications to the new mums at a recent family day, held for all the Invercargill franchisees. They shared a potluck lunch and had an opportunity to meet and greet new team members that have joined Crest recently – including the two newborns.

“I’m just confirming the next generation of Crest franchisees coming through,” jokes Glenn. “It always pays to look ahead, doesn’t it?”