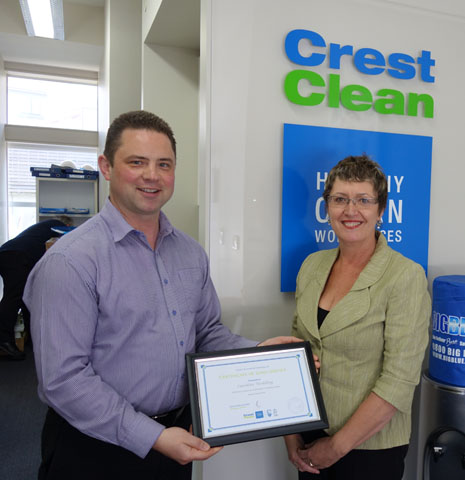 Being Regional Director for CrestClean’s North Shore and West Auckland operations, covering one of the largest and busiest regions in the country, could be a complex and stressful job, but Caroline Wedding is buoyant as she reflects on her three years in the role.

“Crest is everything they said they were going to be, which is a nice, pleasant surprise. They’re genuine people,” she says with a laugh. Overall, her expectations have been exceeded.

“The processes and systems they have in place are far better than I ever imagined them to be and it takes a lot of the risk and hard work out of it for me,” she says. “Then I can get on and do the piece that I do well because I don’t have to worry about everything else – all the invoicing, all the training all the marketing – all I have to do is get out there and find new customers and look after them, which is what I do well. That has delighted me.”

Several years in sales and management prepared her well for a role at CrestClean and it was through Dries Mangnus, CrestClean’s Auckland Regional Director, that Caroline was initially connected to the commercial cleaning industry.

“It was more than 10 years ago now,” she recalls. “He came into my office when I was at Initial Hygiene, to sell me cleaning services. We ended up becoming strategic partners – he needed a hygiene partner and I needed a cleaning partner. We spent several years doing that and eventually he approached me about coming to Crest, but I wasn’t ready. When he asked the second time, I was.”

Part of being ready was making sure her son, Christopher, was old enough. “One of my goals was to be self employed by the time my son was in high school and I was. It was almost to the day.”

Now Christopher’s nearly finished with school and Caroline is looking forward to expanding her business even more as she considers the next three years.

“I had a huge amount of growth in my business last year, so now I have someone helping me with new business development and another person making calls to check in with customers. If I grow the business to what I think I will in this financial year, I may have to think about putting in another layer of support.”

“I’m very conscious that I’m only one person – the easiest part for me is selling the business and the hardest part is keeping it. If you’re not looking after what you’ve got you’ll never get to where you want to go.”

Caroline speaks like the competent, successful businesswoman she is, however she says she’s always been more concerned about seeing the people around her excel, which is what makes working with her 27 franchisee teams another gratifying aspect of the job.

“I have a lot of people in my team who are doing well and I’m really proud of them,” she says. “That’s what gets me out of bed in the morning.”

That, and being content with where she is in the world.