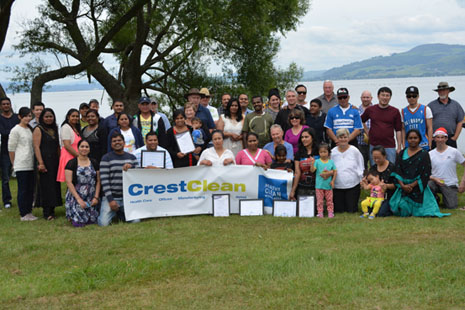 The Crest Teams from Rotorua, Taupo and Whakatane celebrate Christmas together at Hamurana Springs.

Rotorua, Taupo and Whakatane CrestClean franchisees and their families gathered together to celebrate the holiday season and the end of a busy, productive year on Saturday the 13th of December.

The party was held at the beautiful Hamurana Springs Reserve, on the north shore of Lake Rotorua and nearly 90 people attended, including many young children.

The food and catering was prepared by Regional Directors Bill and Claire Douglas, and included many salads, sweets and meats, with a few franchisees helping with the barbeque and showing off their excellent grill skills. 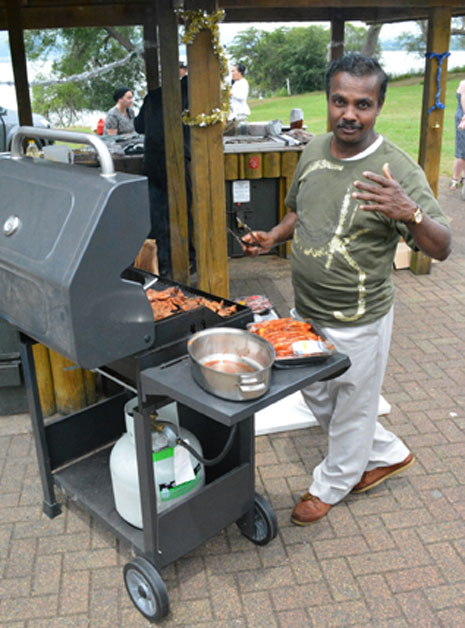 Fortunately, new franchisee Lalith Degambada, is a professional chef, too.

“We had a wonderful day,” says Bill. “Every franchisee was there except the two who said they couldn’t come, so it was an excellent turnout. We played cricket and had some running races with the kids.”

Bill and Claire also took a few moments to recognise the standout performers in their regions. 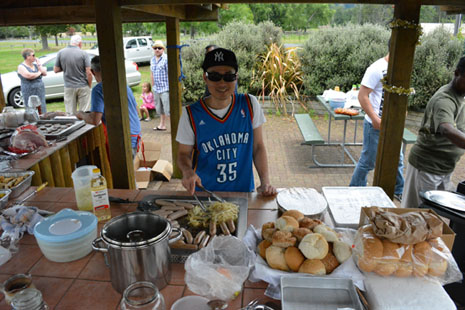 There was a big spread of food for 90 people.

Special certificates were given for Franchisees and Rookies of the Year in the regions. In Rotorua, Franchisee of the Year went to Ranjodh Singh and Swapanjeet Kaur. “They’re wonderful people who have only been with us for 15 months,” says Bill. “He would do anything for me. Now, they’re on the way to India for the Christmas holiday. They’ve only been here two years and this is their first time back.”

Rotorua’s Rookies of the Year were Sunjay and Urvashi Bala, with Bill making note of how they’ve improved their business. “I said to them, ‘You’ve really turned your business around and you’re a pleasure to work with. They’re good people and I’m happy to encourage them.”

In Taupo, Nancy Nandan and Kent Wilkinson were Franchisees of the Year and Jatinder Singh was the Rookie of the Year.

Whakatane’s Geoff and Di Price were the Franchisees of the Year for that region. “Geoff’s also our Hard Floor Care Trainer and he’s been picked to do module training for Master Cleaners Training Institute, so he’s doing really well,” adds Bill.

Certificates of Completion in the Cleaning Professionals Skills Suite were distributed to several franchisees, as well.

“I’m really happy with how the day went,” says Bill. “We usually go to a restaurant and it’s more formal, but this year we decided to do something different and it turned into more of a fun day for the kids. They all said it was the best we’ve had.”