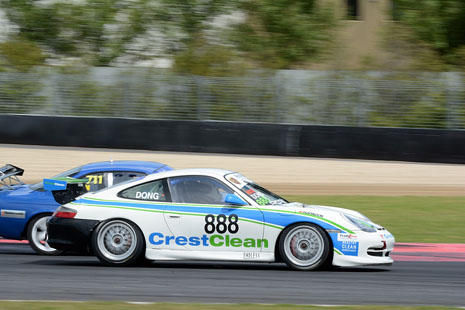 What a hot looking Porsche hitting high speeds at Pukekohe!

The CrestClean Porsche 996 GT3 has a new owner who’s just as impressive on the track as its previous driver. Robert Dong is behind the wheel of the CrestClean-branded car and in his first event in the Porsche series, at the Manfeild circuit in November 2014, he won “Driver of the Weekend.”

Which isn’t a surprise to many in the know – this is Rob’s 20th year racing in the New Zealand Porsche series, making him the longest participating driver in this series. He’s currently in position 7 in MotorSport New Zealand’s Porsche Championship ratings. 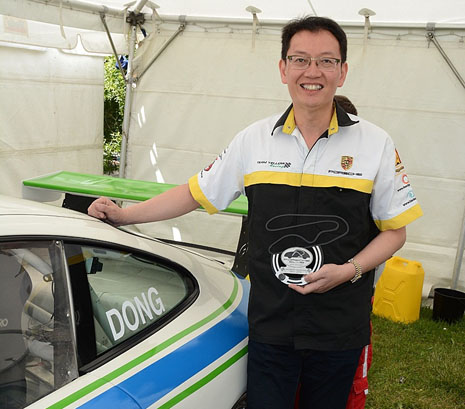 Robert Dong, new owner of the CrestClean-branded Porsche, with his Driver of the Weekend trophy at Manfeild.

The list of Porsche racecars that Rob has campaigned includes a 964RS, a 911S, and 944S2 and, more recently, a 944 turbo. The turbo has a somewhat unique history having being purchased new by well known driver, Graham Cameron, and raced in the Wellington street race. Unfortunately, Graham had a serious crash in event and the car changed hands.

It was eventually purchased by Rob and added to his collection. Rob’s road cars include a 996 GT3 and a 993RS, which is one of only 47 right hand drive cars made by Porsche.

When Rob isn’t racing, he’s a partner in the optometrist firm of Black, Gates, Meek and Dong of Lower Hutt.

The CrestClean Porshe was originally owned and driven by Dave Allison, who was “Driver of the Weekend” at the IRC Porsche racing series. Dave recently sold the car to Rob, but that’s not keeping him from the track. He just purchased a 2008 Porsche 997 GT3 and this car will soon fly the CrestClean colours alongside Rob.