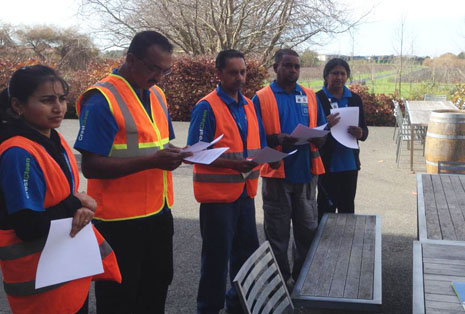 Audits show CrestClean franchisees are serious about health and safety while on customers’ sites.

“I’ve been to every region, met with every Regional Manager and audited a franchisee in each region,” says Andrew. “There were no major non-conformances and we’ve had very constructive feedback,” he adds, in particular regarding how to improve the communications and sharing of information that is part of SafeClean, CrestClean’s Health, Safety and Environmental Management System.

“Key messages that I heard are that it’s common sense. Integrating health and safety is far simpler than many of CrestClean’s personnel initially anticipated,” says Andrew. “The Regional Managers have learnt a lot from the experience of going through the training and audits they participated in, in particular the expectations and how they’re contributing. They really play an important role in setting the standard and communicating and it’s not being treated as simply a ‘tick the box’ exercise.”

Engagement from customers who were on sites during the audits was also a key takeaway for Andrew. “There was a real interest in our processes,” he says, in particular at some schools where principals will become the “officers” responsible for ensuring health and safety compliances, under upcoming government reforms of the law.

For the audits, Andrew developed a Quick Reference Guide for Regional Managers to review the mandatory health and safety compliances and he says the 2014 audit results have created a baseline for future developments and advancements that will keep pace with the implementation of New Zealand’s new Health and Safety Framework. The coming year will see a refining of CrestClean’s HSEMS communications and an online health and safety induction for all franchisees, employees and contractors to test the understanding of basic expectations.

All of which shouldn’t seem onerous to Crest franchisees who already seem to understand how integral health and safety is to their business operations.

“One of the things that really impressed me was how much franchisees understand the importance of safety for themselves and their workers,” says Andrew. “They also had a genuine interest in improving what they were doing.”