King Tut Damage: The Cleaners Did it…Or Did They? 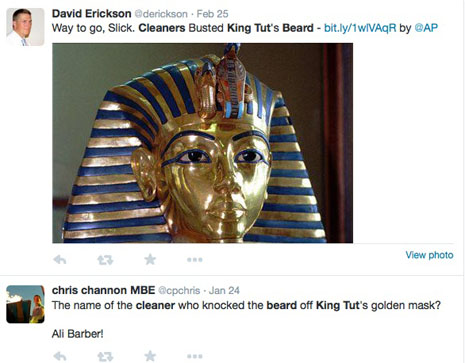 Blaming the cleaners and making fun of them was the go-to on Twitter. The tweets were wrong.

Sounds like the Egyptian National Museum needs competent cleaners they can trust.

Mystery has always surrounded King Tut ever since the 1922 discovery of his elaborate tomb and remains, however the most recent controversy involves how the beard of his priceless gold death mask was broken off and shoddily repaired.

Who was the first to be blamed? “The cleaners.”

“The blue and gold braided beard on the burial mask of famed pharaoh Tutankhamun was hastily glued back on with epoxy, damaging the relic after it was knocked during cleaning, conservators at the Egyptian Museum in Cairo said Wednesday,” the Associated Press reported on 21 January.

The shocking bit of news was re-posted and tweeted all over the world, generating much derision and jokes at the cleaners’ expense.

But, did the cleaners really do it?

Read deeper into the same 21 January AP report: “Three of the museum’s conservators reached by telephone gave differing accounts of when the incident occurred last year, and whether the beard was knocked off by accident while the mask’s case was being cleaned, or was removed because it was loose.”

Similarly, the Guardian steered questioning toward management: “Did bungling curators snap off Tut’s beard last year, and if so, was it stuck back on with the wrong kind of glue?” wrote Patrick Kingsley in a 22 January report.

No mention of cleaners is made as he goes on to write that museum staff claimed curators broke it during lighting maintenance.

The fact that reports have varied about who exactly is responsible for the damage entirely missed the headlines, which focused instead on the dodgy cleaners: King Tut’s Mask Damaged; Beard Snapped Off During Botched Cleaning (Huffington Post); “Cleaners knock off King Tut’s beard, glue it back on” (The Week); “King Tut’s Cleaning Crew Caused an International PR Problem” (PR Newser); Tut, tut! Tutankhamun’s beard comes off during cleaning, gets botched repair (rt.com).

Defamation of the cleaners complete, it goes under-reported that curators have since admitted that it was broken during maintenance and they botched the restoration and the head of restoration has been transferred to the museum of royal vehicles.

Too late: the cleaners took the fall on social media and international news sites.

CrestClean knows there is an all too common propensity to blame the cleaners – the untrained, unnamed, uneducated people who aren’t really on staff and are only around at night, probably doing things they shouldn’t be doing, like playing with King Tut’s beard.

This is exactly why all CrestClean personnel undergo training in how to work and behave in all types of environments, they undergo background checks with the Ministry of Justice and wear uniforms and ID badges at all times, they’re educated in best practices and the latest industry innovations, and they’re engaged with customers to ensure they are more than just nameless faces. “They’re not just customers, they’re your friends,” said one longtime CrestClean franchisee, Prithi Nair, when asked about her approach to customer service.

Would a friend go and break something and not fess up? If CrestClean was on the job, the cleaners wouldn’t have been dirtied in the headlines.