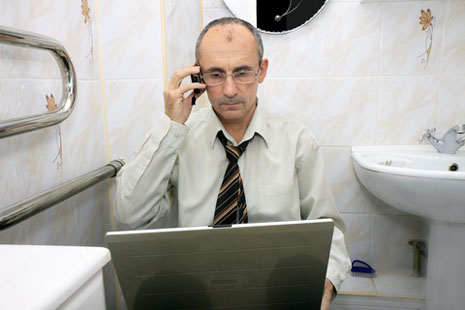 Just in case you need another reason to have clean toilets, here it is: turns out people are doing a lot more in there than the usual.

A consumer study released by SCA, a hygiene products company, shows a surprising number of people use their workplace restrooms to eat, exercise, sleep, have a cry and as a getaway destination.

Though the study was conducted in 13 countries, SCA reported the US results, which showed that 8 percent of people were eating in the washrooms, 7 percent exercising, 5 percent smoking and 5 percent sleeping. Texting and talking on the phone were also popular restroom activities.

More than that, workplace washrooms are being used as escapes, perhaps due to lack of a better option. Twenty-three percent of women and 17 percent of men go there to deal with the frustration of everyday work life, or for a moment alone or get space from colleagues (21 percent of men and 18 percent of women.) An average of 10 percent of all adults has used their workplace bathroom to take a break to cry.

Which sounds like washrooms are getting more traffic than one may think and surfaces are probably being used for purposes they weren’t intended. All the more reason to make sure they’re as clean and hygienic as possible!

The 2014 SCA Hygiene Matters Consumer Survey was conducted in Brazil, China, France, Germany, Italy, Spain, Sweden, Mexico, The Netherlands, Russia, South Africa, United Kingdom, and the United States. Responses were compiled through a web-based survey, and a total of 13,492 respondents. Approximately 500 women and 500 men were surveyed on each market.