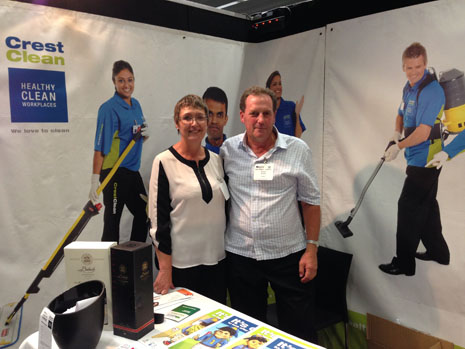 Held on March 5 at the Trusts Arena in Henderson, CrestClean was one of 40 local businesses that exhibited. “It was very engaging,” says Caroline. “People wanted to talk and there was a lot of recognition of CrestClean, but people were saying, ‘Oh, I’ve seen your TV ads, I see your vans all over, it’s nice to see people.’”

Caroline was accompanied by Rowan Washer from PestCo, which is CrestClean’s new pest control services division. The two fielded many questions and gave out information packs with free sanitiser, microfibre cloths, lanyards and notepads. There was also a prize draw to win a case of Babich wine, which Caroline says everyone was eager to enter.

“It was a very good branding exercise,” says Caroline, who received several requests for quotes on cleaning services. “There were lots of people I knew and business owners I knew, and to be seen among them was very good. It cements our CrestClean team really strongly in the West Auckland community.”