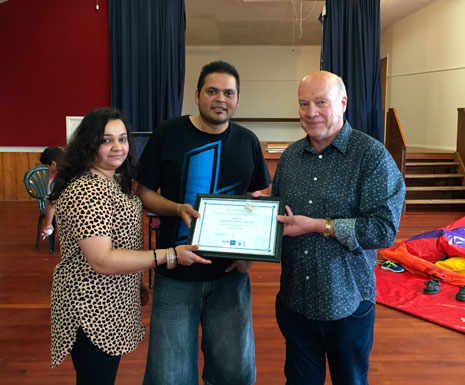 “You can go as far as you want with Crest. We just put our heads down and went for it,” says Danish Sharma, who has owned a CrestClean franchise for five years.

In that time, he and his wife, Aijita, have been able to grow their cleaning business to include more comprehensive school caretaking duties, and have been able to secure financing to purchase five houses, which they renovate and rent in the greater Wellington region as a side business.

“Without the success and income from Crest, I wouldn’t be able to buy these houses and continue the property business that I was doing before I joined Crest,” he says. “I used to do all the work myself and learned all about plumbing, tiling, painting. Now I am able to hire people. With Crest, the income is there for that.”

About one year ago, Dan also became the Quality Assurance Co-ordinator for Wellington and Hutt Valley, charged with conducting quality audits on customer sites and assisting franchisees new to the business. He conducts Regional Training courses and does assessments for Master Cleaners Training Institute, as well, which requires some travel outside of Wellington to Hawkes Bay, Kapiti Coast, Palmerston North and Nelson. Meanwhile, Aijita keeps their CrestClean business ticking along and ensures excellent cleaning services for their customers, which include several schools and Government House in Wellington.

Dan and Aijita first became interested in owning a CrestClean business through a friend in Auckland. “We were running a business in Auckland but we wanted to move back to Wellington because that’s where we’re from. We had a young 2 year old at the time and wanted to be able to work and have time with the kids. This is a good job and the hours suited us, even though we didn’t have a background in cleaning.”

Even though their business has grown a lot and Dan’s taken on new responsibilities at the company, the hours still work for them and their two sons, ages seven and eight. “They don’t like to be left out of anything,” he says. “We try to keep weekends free just for them. I’m managing quite a bit, but it’s all possible.”

“I really like the opportunities that are available at Crest,” he adds. “I didn’t expect to go this far with it. I joined as a franchisee and the opportunity came around to do more and I just took it and it’s grown from there.”