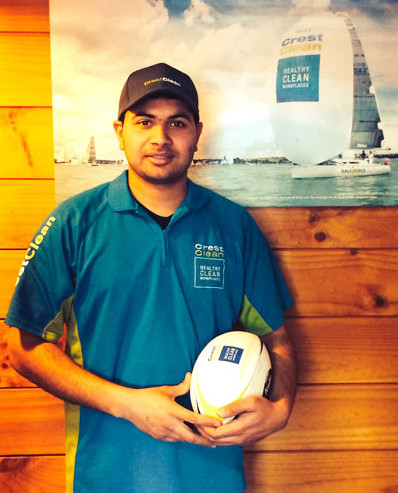 Hamilton franchisee Harvinder Singh is one of many who have benefitted from CrestClean’s ‘Buy Now, Pay Later’ offer.

CrestClean’s ‘Buy Now, Pay Later’ offer gave Harvinder Singh the opening he needed to be able to purchase his own business.

The Hamilton franchisee decided to take up the offer eight months ago. Harvinder is one of 10 franchisees throughout the country to do so.

“I always wanted to own my own business,” he says. “This offer helped me to do that.”

The offer helps with any bank financing, as your bank views the reduced upfront cost as good for your cash flow and it allows the business to become established before increasing any lending.

Harvinder says the offer is a great option if you do not have the total sum required to purchase a franchise upfront.

“It is good that Crest offer this option to future franchisees. Everything is going good. I have great relationships with my customers and I like working in Hamilton,” he says.

CrestClean General Manager Franchise Services Sam Lewis said the offer has been hugely successful for the franchise and CrestClean.

“It works for the franchise so they don’t have to come up with such a large financial investment when they commence the franchise,” he says. “They can use surplus income to save for the next franchise purchase in six months or show their bank and/or lender that they have a positive credit history before buying again.”

Sam says regions that require new franchisees urgently to meet the high demand for CrestClean’s services have this deal applied to them.

“By allowing lots of contracts to be serviced it enables the regions to grow. For example, Nelson couldn’t grow but the two recent ‘Buy Now, Pay Later’ deals have enabled the Regional Manager to start searching for business again. She was scared to answer the phone at one point because she thought it could be a new customer wanting Crest to clean,” he says.