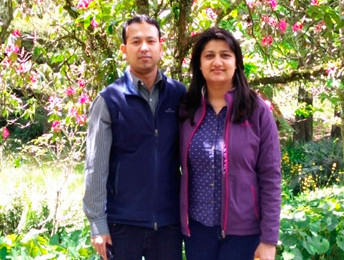 Prasun and Diksha Acharya have achieved much more than they ever thought they would thanks to CrestClean’s Move to the Regions Programme.

For Prasun and Diksha Acharya, owning their own business was out of reach until they discovered CrestClean’s Move to the Regions Programme.

The programme, which started in 2011, provides people, who would like to own their own business, with an opportunity to move outside of Auckland and Wellington.

Prasun and Diksha have relocated to Napier under the programme. They purchased a CrestClean franchise in 2013, after they moved to New Zealand from Nepal.

As part of the programme, Prasun and Diksha were given $2000 toward their relocation cost, which gave them a helping hand.

“I was living in Auckland, selling ventilation systems and my wife, Diksha, was the one who actually wanted to buy the franchise. She wanted to do something of her own. We started visiting different cleaning companies, but clearly Crest stood out from the rest,” he recalls.

“We were just renting in Auckland and getting our own house was out of reach.”

“To stay in Auckland? Relocate? Sometimes it’s a matter of identifying what your real goals are and then discovering that there’s an opportunity available that could help you to make them happen.”

After operating in Napier for two years another opportunity presented itself – to buy a Master Franchise in New Plymouth.

In February this year, the couple sold their successful franchise in Napier and purchased a Master Franchise in New Plymouth.

This gave Prasun, who became Taranaki’s Regional Director, an amazing opportunity to grow and develop a new region for CrestClean.

“I am absolutely pleased,” he says. “The opportunity to buy a Master Franchise would not have happened if we were not introduced to the Move to the Regions Programme.”

Taranaki is the 26th region in Crest’s national network of franchisees.

Prasun, Diksha and their four-year-old daughter have settled into a nice rental home in New Plymouth.

“It feels like home with the mountains here. When it snows, it reminds us of Nepal. We enjoy the quiet and relaxed pace of life. People in Taranaki are generous and very friendly. It is a nice place to live and to raise a family. There are not many places you can find a snow-clad mountain on one side and a sea view on the other side. We feel blessed to be here,” he says.

Shortly after they arrived in New Plymouth, the Nepal earthquake struck.

“Our family and friends survived but the earthquakes have had a lasting impact,” he says. “We wanted to do something to help. We decided to collect money for The Red Cross.”

The collection led to a powerful interaction, which paved the way for longstanding professional relationships within the community.

“Involvement in the community is vital – it demonstrates commitment to the area,” he says.

“It has given us a number of opportunities to grow our business portfolio,” he says. “We are involved with the Chamber of Commerce, BNI breakfast and Venture Taranaki. We provide sponsorship with school principal cluster groups to increase our business profile.”

Prasun says his business philosophy is helping him succeed in his role and region.

“I am instilling in my franchisees the importance of self-discipline, which has so much to do with managing your own business and going above and beyond in the service you provide.”

“It never pays to cut corners in the cleaning business,” he adds. “If somebody has paid for something it can’t be less than that. That’s what I expect as a customer.”

Prasun says by this time next year, Taranaki should be one of the fastest growing regions for CrestClean.