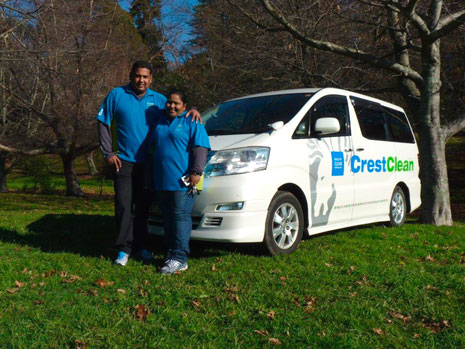 Nischal Lal and Sameeta Kumar are glad they relocated to Nelson from Auckland. The support they received from Crest made the decision to move and the process easier.

Without the support from Crest, there is no way Nischal Lal and Sameeta Kumar would have been able to relocate from Auckland to Nelson.

“Crest has been really supportive. We feel like we are part of the Crest team,” she says. “Everyone from the admin staff to our regional manager – they have all helped us. We are really grateful for that support.”

The husband and wife Nelson franchisee team joined Crest in April this year.

“We used to run our own cleaning company in Auckland. The competition was really bad. We had always wanted to purchase a Crest franchise,” she says. “Once we got the funding sorted we decided to look at relocating too. It was always on the cards.”

Sameeta says the decision to move to Nelson is one of the best they have made. “The climate is so nice and so are the people. It is not too big or too small. We love the area,” she says.

Nischal and Sameeta received their first thank you note from Grove Street Kindergarten.

The note read: “Hi there, welcome to Grove St Kindergarten. We love your work. Thank you very much; you are doing a great job. Kind regards, from Ruth, head teacher”.

“It was quite nice to receive that note,” she says. “We take a lot of pride in our work and it was really nice to be recognised for that.”

“They have been with us for about three months. They have already grown working 50% more than what they were when they started. They are coping very well and it is lovely to have them as part of the Crest team.”

Welcome to Crest Nischal and Sameeta!