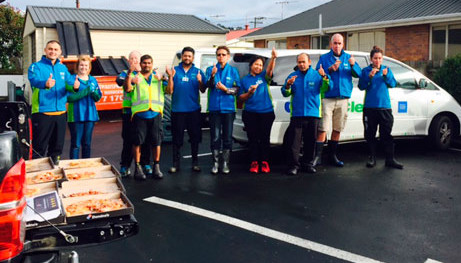 CrestClean Dunedin franchisees enjoyed pizza after they finished cleaning up the kitchen at Radius Fulton Rest Home, which was evacuated as a result of flooding.

A team of 12 Dunedin CrestClean franchisees rallied together to clean up a ‘heart-breaking’ site after widespread flooding caused major problems for businesses last month.

As a result franchisee teams came to the aid of many businesses around the city including Radius Fulton Rest Home.

The kitchen, which is run by Ace Food Services and supplies residents at 10-aged care facilities with meals, had to be evacuated as a result of sewerage and contamination.

Ace Food Services Manager Julie Cooper contacted Dunedin Regional Manager Tony Kramers who was part of the clean up team that came to the rescue.

It was hard work for the team who had spent most of the previous evening attending to their normal duties.

“Due to the kitchen closure, it meant that Ace Food Services had to find alternative locations to prepare food for their residents. Everyone did a fantastic job. I shouted them pizza after we had finished and coffee to keep them going. It was freezing cold. It was the least I could do for them,” he says.

“It is imperative that we continue supplying food to our clients who are vulnerable members of our community. The kitchen had sludge and water all through it and in the outside yard,” she says. “Everything was mopped, dried and sanitised to a high standard that the Dunedin City Council environmental officer commented on how good it was.”

“It is a pleasure to be involved with so many people who were willing to get among the community and put their hand up to help in a very unpleasant situation. It was very gratifying,” she says. “We would highly recommend Crest Commercial Cleaning Ltd.”