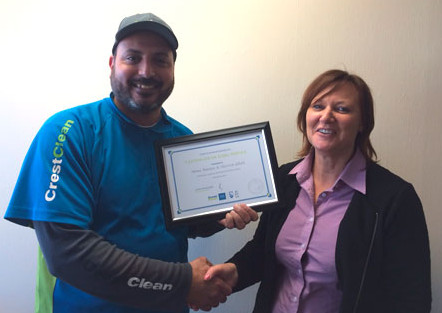 Mina Hanna is proud to be a CrestClean franchisee.

“There is a good system behind Crest which makes me feel very confident and proud to be a CrestClean franchisee,” he says. “Seven years has gone very fast.”

During that time, Mina has achieved a lot within and outside of Crest including a Diploma in English, a Graduate Diploma in Computer Aided Design and he has recently completed a paper about building codes. As well as owning a Crest franchise, Mina also works part time as a draftsman and runs his American Delight hot mini donuts caravan on the weekend.

“I have achieved a lot during that time and I could not have done it without Crest. I can’t believe I have managed to do all these things together,” he says. “I have a great wife, Shereen, that helps me all the time.”

One of the things Mina enjoys the most about working with Crest is customer interaction.

“It is a great way to build up networks and good relationships with people. I also like the flexibility that comes with owning a franchise. People are really nice and understanding,” he says.

Mina, like many of Crest’s franchisees, continues to receive the benefits of upskilling as part of the many training courses offered through Master Cleaners Training Institute.

“I think they are great. It is a great opportunity for franchisees to up skill,” he says. “I appreciate the management of Crest. Everyone works really hard including the Master Franchisees. Crest is a great company.”

“He is always keen to make sure his contracts are of a high standard and is a very obliging franchisee,” he says. “I think it is fantastic that he has achieved 7 years with Crest. It is a significant achievement and he should be very proud of this.”