CrestClean Steps Up its Programme to Move people to the Regions 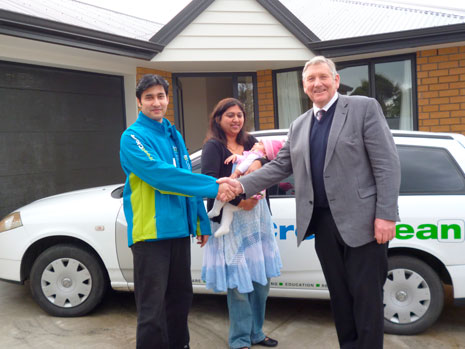 Ashneer and Durgeshni Datt were welcomed to Invercargill by local MP Eric Roy after they relocated from Auckland under Crest’s Move to the Regions Programme.

CrestClean is committed to moving people to the regions.

The Move to the Regions Programme, that pays relocation costs to help families settle outside of Auckland, is a win-win. Families can exchange the fast-paced lifestyle and expensive house prices for a comfortable one with cheaper living and more opportunities; and CrestClean gets much needed personnel in the smaller regions to service its ever-increasing customer base.

Part of a renewed commitment, Crest has increased its relocation programme offer from $2000 to $3000, and due to large waiting lists in Auckland for people to buy franchises, Crest is actively contacting all Auckland franchise prospects to discuss the opportunity.

This concept has gained traction this year with the Government announcing new immigration rules designed to boost local economies and make it more attractive for skilled migrants and businesses to move to the regions.

Skilled workers who take jobs in the regions will gain an extra 30 points instead of 10. Those who set up businesses outside Auckland will be given 40 extra points, instead of 20. New migrants will also have to stay for at least 12 months rather than three.

“A lot of people who move into the regions end up creating their own businesses and their own opportunities. Outsiders come in and they look at things in a different way and they find opportunities that often locals can’t quite see,” Local Government New Zealand President Lawrence Yule says.

Increased living and property costs in Auckland have also contributed to a rise in the number of people applying for jobs and purchasing properties in the regions.

CrestClean’s National Relocation Manager Chris Barker says there has never been a better time to move to the regions.

“Smaller regions provide franchisees and their families with a great lifestyle that is full of opportunities. The schools are smaller and there are no zoning issues. People have more choice,” he says. “To buy or rent a house in the regions, prices are considerably less. The move allows them to purchase their own home.”

Ashneer and Durgeshni Datt moved from Auckland to Invercargill, under the programme, three years ago. The programme has given Ashneer, who used to work three jobs in Auckland to keep his family afloat, a comfortable paced lifestyle with a turnover of more than $100,000 a year. The move has also given Ashneer and Durgeshni more time to spend with their two children and the ability to purchase their own home.

The CrestClean Move to the Regions Programme also helped pave the way for Prasun and Diksha Acharya’s future after they relocated from Auckland to Napier. After two years operating in Napier, Prasun sold their successful franchise and purchased a Master Franchise in New Plymouth. The programme gave Prasun, who is now the Taranaki Regional Director, an opportunity to grow and develop a new region for CrestClean.

If you would like to discuss CrestClean’s Move to the Regions Programme contact CrestClean National Relocation Manager Damon Johnson, 027 426 2213 or email: damon@crestclean.co.nz