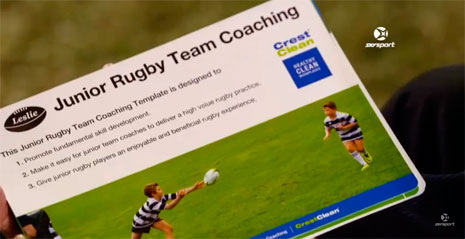 The programme is aimed at junior coaches and/or parents who are interested in coaching the game in the future. It promotes fundamental skill development and makes it easier for junior team coaches to deliver a high value rugby practice. The programme, run by John Leslie, also ensures players are given an enjoyable and beneficial experience.

The Breakdown, which is hosted by former All Black Jeff Wilson, featured part of a coaching session that was filmed at Pakuranga Rugby Club in June.

Since March this year, 48 clinics have been held throughout the country. During each clinic, a team of 12-year-olds demonstrates 14 core skills while he explains his coaching philosophies and tips for keeping the energy high and the game fun for kids.