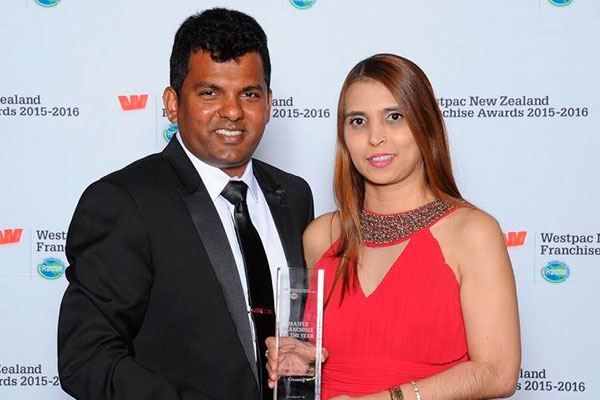 CrestClean South and East Auckland Regional Managers Viky and Nileshna Narayan have been commended on their ‘well structured business’ following their success at the 2015/2016 Westpac New Zealand Franchise Awards.

The husband and wife team won the Master Franchisee of the Year Award. “This accolade is a great reflection on our team,” Viky says. “We have a great team of franchise owners who all work very hard. And we’ve got great support from CrestClean. It’s the structure and systems from Crest that have allowed us to excel as Master Franchisees.”

Originally from Fiji, Viky and Nileshna purchased a CrestClean franchise in 2005 and took up the master franchise in 2008. They now oversee the operations of 75 franchises and 160 personnel that provide commercial cleaning services for more than 350 customers in South and East Auckland.

Award judges commented that Viky and Nileshna have ‘a well-structured business with a well thought-out vision and strategy in place. Their results show that their systems, processes and practices are delivering the sort of value that the business has set out to achieve’.

“Going through the interview process, the judges were very impressed with the way we are running the show,” Viky says. “The judges commented that our entry was one of the outstanding ones, which was great to hear. They were very pleased with it. Making it to the finals was a big thing for Nileshna and I. We are very happy that we won. It means a lot to us.”

NZBEF CEO Fiona Gavriel says the judges were impressed with the high calibre of entrants.

“Selecting the winners was challenging and there was a lot of review, thought and discussion that went into the process. Franchise operations have much to offer the New Zealand economy and it is very pleasing to see franchisors recognising the value in offering franchisees rigorous support systems,” she says. “In the end, everyone gains through a clear vision backed up by well-developed operational processes – and a very real focus on the customer and their needs.”

The awards were presented at a gala dinner attended by more than 270 people at the Rendezvous Hotel, Auckland, on November 14.

“One thing is for sure, we are heading in the right direction. It is great being part of the Crest team and being a Crest ambassador. It is a great team to work with,” Viky says.