Nitendra and Karishma Narayan were named Hawkes Bay’s Franchisees of the Year.

Hawkes Bay had a lot to celebrate at the Christmas party.

The end of year celebration was held at the Thirsty Whale.

“We had a fantastic Christmas lunch overlooking the Napier harbour. We had an assortment of seafood and international cuisine,” she says. “It was great to see everyone relaxing and enjoying themselves. There was so much to celebrate.”

Nitendra and Karishma Narayan were named Hawkes Bay’s Franchisees of the Year. 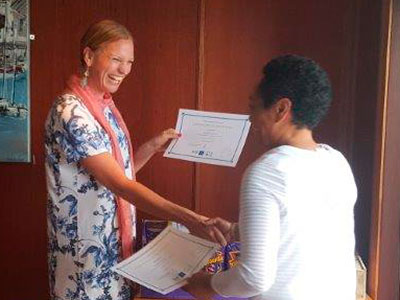 Regional Manager Abby Latu says Nitendra and Karishma are very good to work with and have fantastic communication skills.

“They had no complaints last year and they always visit their customers to make sure everything is going well. They have sound knowledge of their business and they are committed to developing their franchise,” she says.

Sally and Junior Moate received the New Franchise of the Year award for all round excellence, top effort and customer satisfaction.