Riding high with your own franchise 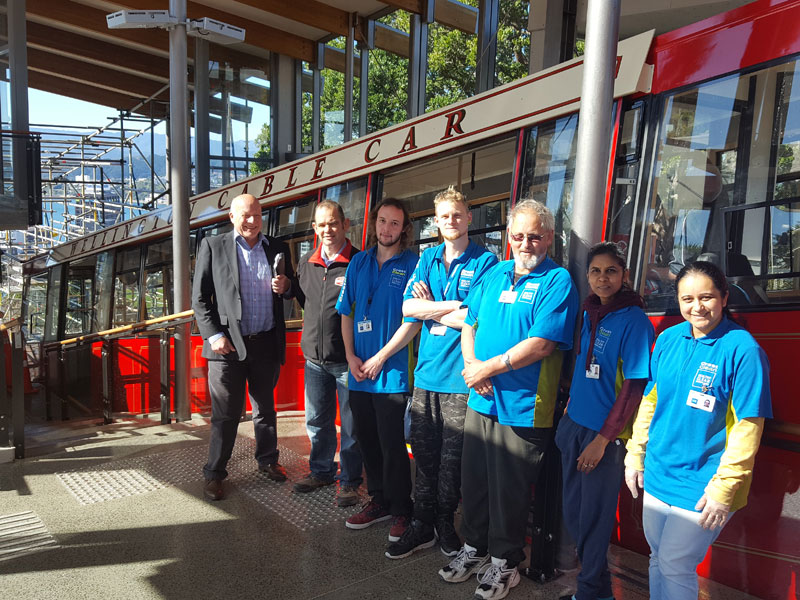 With a good job done for another day, Crest teams take a chance to pose against the background of one of the revamped cable cars. With them are Richard Brodie (CrestClean Wellington Regional Manager), and Matthew Hardy (Passenger Service Manager).

These Wellington cleaners get to enjoy a free ticket to ride as part of their daily routine.

Being part of a CrestClean Franchise, they enjoy the variety the role brings them carrying out cleaning duties for the revamped Wellington Cable Car.

With stunning views over the city landscape, who ever said being a cleaner was dull.

And the staff have taken a real shine to the landmark cable car in more ways than one.
CrestClean workers are enjoying the daily experience of keeping one of the capital city’s most popular attractions in pristine condition.

Securing the cleaning contract has been a prestigious achievement for the company and its
Wellington Franchisees, said Philip Wilson, Wellington Quality Assurance Co-ordinator.

“It’s a really great contract to have, doing the cleaning for such a recognised tourist attraction. The staff get a free ride each day and they love the work and it’s a new experience for them.
“It’s also been great brand exposure for CrestClean as our staff are highly visible in their uniforms.”

The Wellington Cable Car is a funicular railway in Wellington that runs between Lambton Quay and the suburb of Kelburn. The cable car rises 120m over a length of 612m.
And it’s a non-stop operation for CrestClean with cleaning being carried out seven days a week.

The cable car has just formally reopened after a two-month, $5 million refurbishment. Coaches have been given a timely upgrade. Improvements have been made to the Cable Car Lane, and there is a new ticket booth.
“It looks awesome, and we are proud to be part of its future,” added Philip.