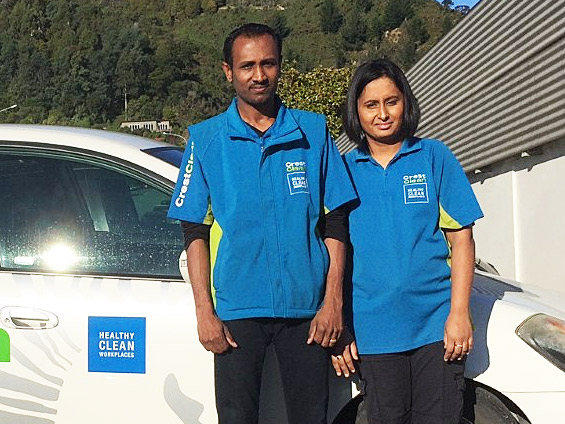 Nelson ticks all the boxes for Danial and Arishma Singh.

When Danial and Arishma Singh first came to CrestClean they were working hard for little reward in Auckland.

They lived in a small flat behind a shop in an area known for a high crime rate and had bars on all their windows for security.

Then they took a leap of faith with CrestClean’s Move to the Region Programme, shifting to Nelson to begin a new chapter in their lives in May 2015.

Danial said: “I could not believe that we were able to buy a business.”

Upon arrival in Nelson, they were able to find a lovely sunny and secure home in a good area to base themselves, and immediately noticed the reduced cost of living. Rental costs are approximately half of Auckland rates.

Daily costs have reduced with Arishma saying that “the same amount that we used to pay every month for water in Auckland we now pay only every six months”.

By making the move to a region, Danial estimates they have got ahead financially by 5-10 years.

This has also been helped by an understanding and supportive Regional Manager, who has been able to find them work within a 10km radius of their home with an income guarantee.
In the short time that Danial and Arishma have been in Nelson, they have more than doubled the size of their business and have invested in a large carpet machine to further add value.

Their goals include expanding their CrestClean business further and investing in their first home.

Danial said the hardest part of their relocation was saying goodbye to their family and friends but they have never regretted their move and find it easy and affordable to visit and remain in contact with them.

“People here are really friendly and patient and it has been one of the best moves that we have ever made.”