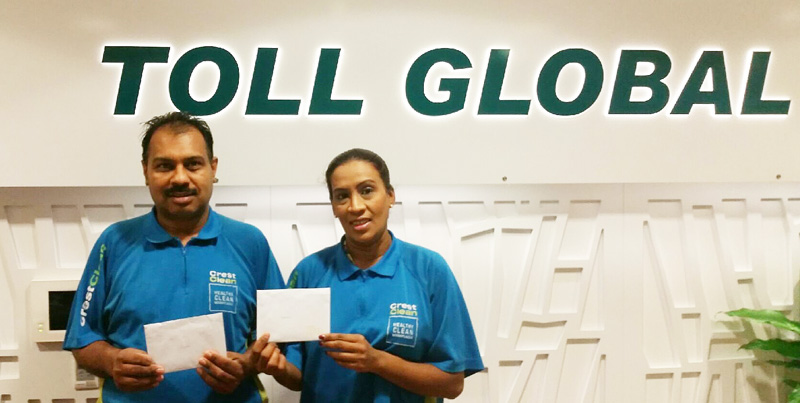 Ashok and Kamni Kumar were rewarded for their quick thinking.

Being a franchisee, it’s always nice to get great feedback from happy clients.

And it’s not every day you get singled out by management and presented with a $120 shopping voucher for going the extra mile.

But that’s just what happened to Ashok and Kamni Kumar, who have been hailed for preventing a major financial disaster at the South Auckland freight forwarding company where they work. The husband and wife team raised the alarm after discovering flood water seeping into an office containing vital computer equipment.

Donna Powell, Office Manager at Toll Global, said Kamni and Ashok’s actions had been crucial and had saved the company many thousands of dollars.

“They intercepted something that could have been a whole lot worse. As it was it was pretty bad. We had inches of water down there and it was going into our server room.”

She added: “They mucked in with brooms and swept all the water out the doors. They were totally on to it and alerted our people in good time and just worked above and beyond what they needed to do.”

And Kamni has a timely reminder of the day she helped prevent a major disaster at Toll Global. Her new watch was purchased with the shopping voucher she and her husband received from grateful managers.

The franchisees not only alerted staff and helped move office equipment, they happily stayed on for several hours and mopped up the mess.

Problems began after a torrential downpour when wild weather hit South Auckland.
Unbeknown to staff, rain water had seeped into the company’s building and began flooding a server room and office areas.

“A substantial amount of water came in,” said Donna, who had nothing but praise for our franchisees’ actions.

“They are always so willing to do anything and are so obliging and they went the extra mile on that particular night. They did go above and beyond what they needed to do.”

Kamni said she was shocked at the scene before her eyes on discovering the flooding. “The water went everywhere.”

She added: “Before it was too late I told my husband to quickly call more staff so we can put all the things up on the table. We managed to do that and nothing was damaged.’’

It was a long night for Kamni and Ashok, they finally got home just before 5am as they had to complete work for other clients before they could finish for the day.

“We didn’t really mind, it was good to help them out,” said Kamni.

The company had told them how well they had done.

“They thanked us a lot. They said without you guys everything would have been damaged. It was only me and my husband who had been in the office at the time.

“I was really happy to help them. All the staff there are so friendly with us and are really nice.”

The couple have been with CrestClean for almost four years and love the freedom that comes from being a small business owner. “I really enjoy my job and at the same time I get a lot of time for my family as well,” said Kamni.

Viky Narayan, CrestClean’s Regional Director for South and East Auckland, was delighted and said Kamni and Ashok were hardworking franchisees.