Franchisees are a class act 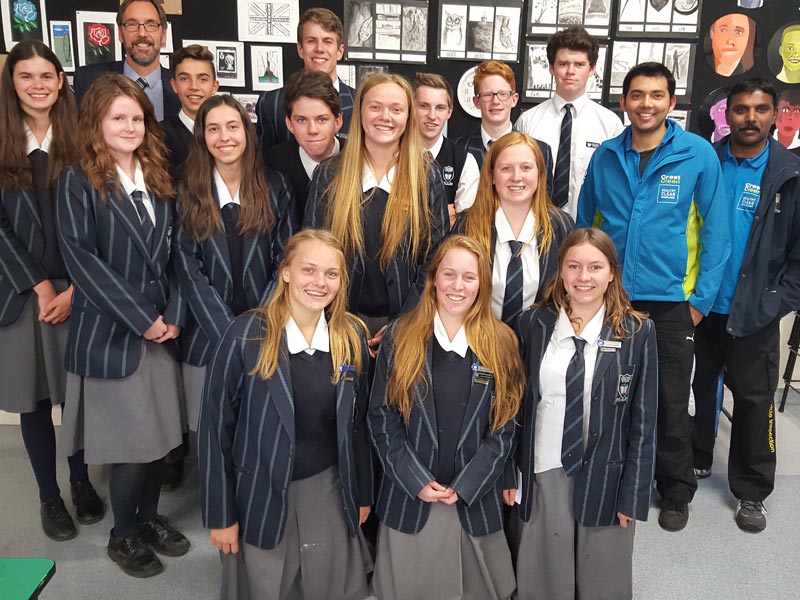 Jay Gounder and Milvin Rani are top of the class at Hastings Christian School.

If you thought cleaning was dull, think again.

Communicating with our clients is key and all part of the high service that is the norm – but sometimes our franchisees go well beyond the normal call of duty.

Take CrestClean’s Jay Gounder and Milvin Rani, who have pulled off a feat that might well challenge the most experienced teacher. They kept a bunch of teenage students captivated for a whole hour by sharing their religious beliefs.

Jay and Milvin had youngsters hanging on their every word when they were invited to talk about their Hindu faith at Hastings Christian School.

School principal Gavin Clark was delighted and has taken his hat off to the pair, who answered a barrage of questions from eager students in the World View class.

A wide range of topics were covered and students were especially keen to quiz Milvin when he told them he’d had an arranged marriage.

Gavin said the youngsters were totally absorbed over the CrestClean franchisees’ answers.

“To be honest it was probably the most enthusiastic I’d seen the students this year in the class. It was hearing it from the horse’s mouth rather than me. It was a great lesson.”

The World View class looks at different religions and has guest speakers who enlighten students through sharing their life experiences.

Gavin came up with the idea of inviting Jay to address the students. Jay works at the school and he brought along Milvin, who is also a CrestClean franchisee.

“In the World View class we look at different world religions. I thought hey, we’ve got Jay the cleaner here who is a Hindu,” said Gavin.

“So I said to the students, ‘look, rather than me tell you all about it why don’t I get Jay to come in?’.

So what did the students get from hearing Jay and Milvin speak about Hinduism?

“It’s obviously an old religion with lots of different strands and versions of it but they were able to help the students understand just what those practices looked like and why they do them. It was a great opportunity.

“Our classes go for 55 mins but we could have gone on longer, they were so keen.

“We had talked about arranged marriages and I had been joking with the students that as a father there was lot to be said for this.

“It turned out Milvin did have an arranged marriage, so that really took a lot of interest from both the girls and guys. Milvin was happy to explain how that all works.

“It was really enlightening for the students to see how another culture does things.

He said the power of hearing real life stories resonated with the students.

“There were so many questions that the students had, and I was really interested myself, I found it hard to get my questions in!

“There was a lot of enthusiasm and interest.”

The session was a two-way affair and the students got the chance to give Jay and Milvin a presentation of a Christian world view, which was well received said Gavin.

Gavin is delighted by the standard of cleaning provided by CrestClean at his school.

He said: “Jay is just a lovely guy and he’s good at his job and he’s a friendly and helpful guy.

“I had my birthday recently and he gave me a gift, which was really nice. He’s the best cleaner I’ve had.

“We’re absolutely rapt with what he does. He puts his very best into what he does and is very personable and we love having him.”

“I love it when my fantastic franchisees are involved with our clients and the community.

“I have a passion for education and encourage my teams to be involved within the schools we service.

“Here is a perfect example of us sharing our cultural differences to educate our young people of Hawkes Bay. Well done Milvin and Jay.”