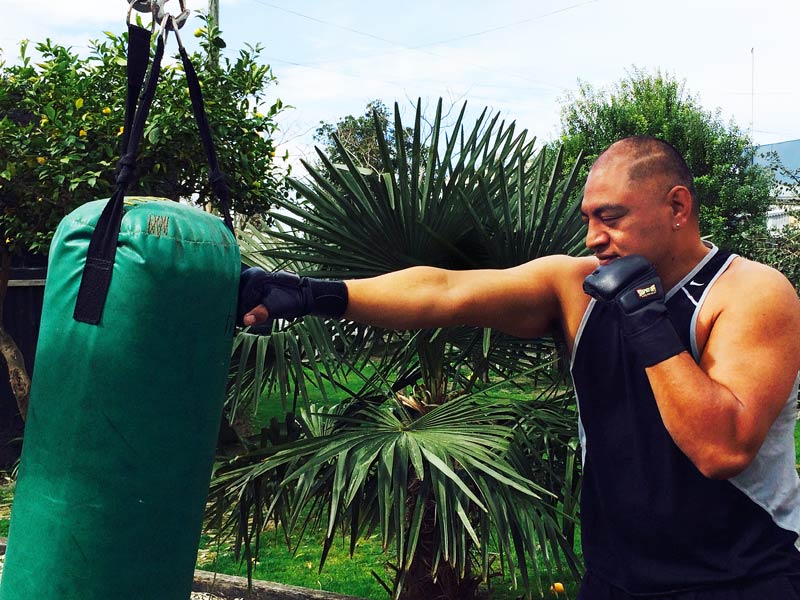 Fiva Latu lost 11kg in preparation for the charity fight.

Tomorrow is D-Day for Crest’s Fiva Latu when months of punishing boxing training is put to the ultimate test when he steps into the ring at a charity fight night.

But win or lose, Fiva knows every moment will be worth it as he faces a tough opponent in the Hope 4 Whanau Fight Night at Taradale’s Pettigrew-Green Arena.

The event is to raise funds for Hope 4 Whanau, which was created to support families dealing with the loss of someone through suicide.

It’s a cause close to the heart of Fiva, who knows the lasting pain and suffering that such a death can bring after he helped support a close friend after his teenage son tragically took his own life.

“Suicide has such a devastating effect on everyone, particularly on parents who can end up blaming themselves and asking what they could have done better,” said Fiva.

Fiva, who also is also a father, said it was important for parents to have good communication with their children.

“I was brought up to keep my feelings to myself. It’s just the way it was back then. I want to be a role model to my kids and make sure they feel they are able to talk to me about anything.

“I look at my own kids and want to support them in any way I can.”

The fight night, a black tie affair, is set to be a sell-out success. All 55 corporate tables have been sold – but some general admission tickets are still available.

Fiva, who has been with CrestClean for five years, has been in training for the event for 12 weeks. A rigorous exercise programme and strict eating regime has seen the kilos drop off and the 42-year-old said he’s never felt fitter.

“I feel really good and I’ve got heaps more energy. The training has been hard and I’ve have to watch what I eat.”

He’s watched his calorie intake closely with chicken, “lots of veges” and protein shakes helping to drop his weight from 111kg to 98kg.

And he’s found others around him and work have commented on his weight loss.

“When you feel good about yourself people around you notice you have a new energy.”

Fiva and his opponent Shane Smith are the fourth bout in the ring tomorrow.

“I’m pretty excited about the fight. I’ll just try to keep to the combinations my coach has been showing me.

“A win would be a bonus but for me it’s all about promoting this great cause,” said Fiva.

“As a family and business owners we want to get more involved in the community each year,” said Abby.

“We have both been affected by suicide and we decided to support the Hawke’s Bay suicide awareness charity this year, along with lots other things we are involved in. We will be donating more than $2500 to this cause.

“Fiva is also on a personal journey of self-improvement and getting fit.

“He has been training hard for 12 weeks and he has been to box fit classes, running with our baby in the pushchair, going to his regular gym as well as some sparing sessions.

“We are super proud of Fiva and to be involved in this cause.”

If you would like to support Fiva’s fundraising night you can make a donation via a special bank account he and Abby have set up. Account: BNZ Suicide Charity – 02-1264-0002290-69