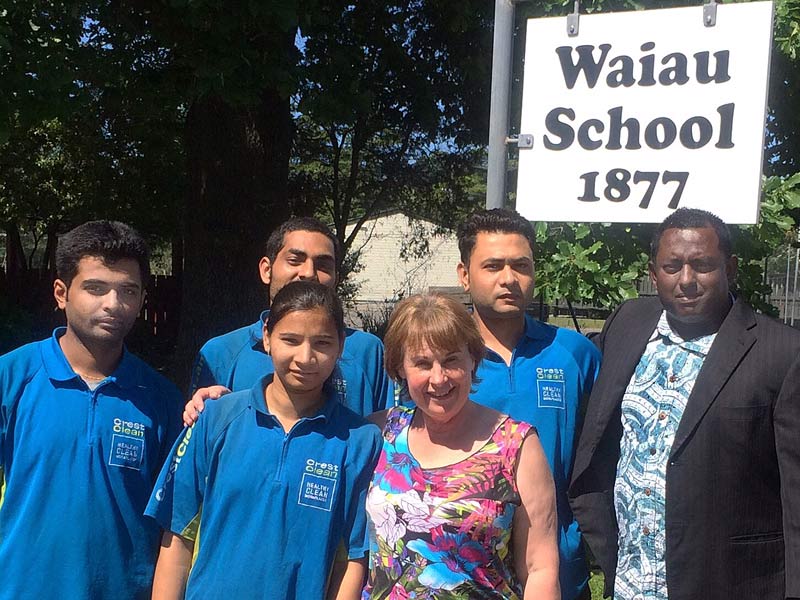 A primary school in a quake-hit north Canterbury township has been able to reopen after a helping hand from CrestClean personnel.

Waiau School Principal Mary Kimber has praised Crest, saying it was through the “hard work of the cleaners that we are able to reopen this school”.

The 139-year-old school became the local evacuation meeting point after the November 14 magnitude-7.8 earthquake, which was centred just a few kilometres from the South Island township.

In the days following the disaster many locals whose homes had been badly damaged took refuge in the school, bedding down on mattresses on classroom floors while others slept in their cars parked in the playground.

The school also became a “welfare centre” for those with red-stickered houses, meaning they were too dangerous to enter.

Yasa Panagoda, Crest’s Christchurch North Regional Manager, said he had initial concerns over safety when he was asked if he could get together a cleaning team to give the school an extensive clean up after locals moved out into other temporary accommodation.

“My biggest worry was sending in our franchisees as the area was still experiencing aftershocks,” he said.

“But the guys were more than happy to go there. When I asked who could help out most of Christchurch franchisees put their hands up.

“Many of our personnel had been through the Christchurch earthquakes and they knew what people living in Waiau had gone through.

“It’s always good to help your neighbours when people are in need. We were only too pleased to help,” added Yasa.

“The principal was so relieved and appreciative to see our team there.”

But just getting to the township was no easy task, said Yasa. The Crest team left at 7am and the drive was full of potential hazards along the way.

“Roads in the area were badly cracked and only service vehicles were being allowed in.

It was a drive of about 150km. It took them nearly two hours to get there. They had to take some farm roads to complete the journey to the school,” added Yasa.

The Crest team was tasked with giving the school a “sanitised” clean so it was fit to reopen.

“We had to wipe down all the surfaces and wash walls and disinfect all areas. It was a pretty extensive job,” said Yasa.